Identifying an unknown chip on a PCB

I'm working on reverse engineering a PCB (no documentation by manufacturer). I've identified all the other chips on this board but this one refuses to give up any google-able info. Are there any resources that can help me identify what kind of chip this is? 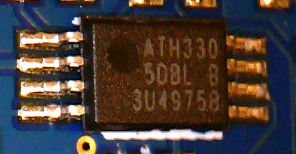 D1, D2, D3 and D4 pins are connected to a 5x2 grid of test points which I've soldered a header into. Vss is connected to the Vss of a PIC32MX695F512H microcontroller.

Let me know if I can provide additional info to assist this process.

The markings look like an Atmel part (it starts with "AT", which is common for Atmel parts). Given the size of the chip and context which you provided, I figured it was probably a serial EEPROM. Looking through Atmel's serial EEPROM datahsheets, your mystery chip is almost certainly an Atmel AT25128B-SSHL SPI EEPROM, which matches your chip's product markings and pinout.

The last line is the Atmel lot number.

You can try this:-

(sorry this won't allow me to post more than 2 links, you can refer wikia page for other sites like All Data Sheet)

Line 3: date code, and other coded information Less often lines 2 and 3 are reversed

Searching via part number is your best bet, if you still don't find it I will help you find it. good luck.

Googling for the 49758 gives some results: Description Datasheet prefix 3U probably means that its a 3V version of the part

Are there any other similar chips on board? If not, it could be an SPI or even i2c flash of some kind, maybe used for, perhaps, a MAC address. The test points would then be used to write the hypothetical MAC address; but you would then expect to see at least some of those same lines connected to the rest of the circuit

So what you could try is to lookup the datasheets of other common 8-pin flash chips and see if any of the pinouts line up with what you have observed.

Not the answer you're looking for? Browse other questions tagged hardware embedded pcb or ask your own question.

5
Thought I found serial port - broke embedded device instead! Help?
7
Identifying a toner chip and its communication protocol to re-program it
4
router: how to break into boot?
1
Can a secondary UART be used to access the MCU?
1
Most idiot-proof method of entry to Reverse Engineer Visual/Control feed for security camera
1
trying to identify this SOP14 chip
0
Identify unknown Atmel chip