So I want to define a c++ string in ghidra struct. I noticed while reverse engineering a C++ binary, I found that, it defines a basic_string class in the symbol tree.

Now I want to define a std::string (not a pointer to it) within a struct. Is there a way to do it automatically right now, or will I still need to manually define a basic_string struct and go from there? Is there currently a way to associate classes and structs together like so (currently I think classes only act as namespaces?

I also tried just simply adding a field with the type basic_string in my struct, but it complains that basic_string is just a placeholder struct.

Haven't yet tested how ghidra would handle a std::string local variable.

EDIT: example code for what I described above:

When you putting this into ghidra, and then do auto-fill struct fields, it will recognize the age and is_male fields, but not the name field, as this is an opaque std::string object.

Up to this point, when I was reversing another (much larger) binary, I simply manually created a new struct:

Is there something that ghidra can do this automatically? Also I'm wondering would there be any portability issues if I just always assume the above struct?

EDIT: I misread the question. The solution I provided only shows how structures can be manually added. There does not appear to be a way in Ghidra to import a struct by text blob.

To add a structure in Ghidra, you have to go to the Data Type Manager - for me it's the third frame on the left-most vertical pane. 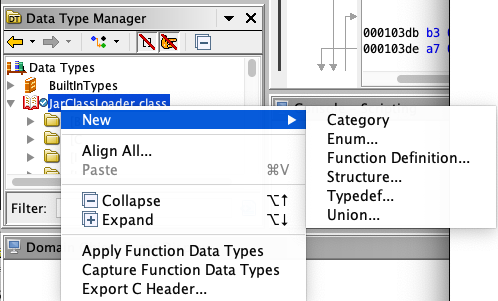 9
Can I define custom enum-type to be used in Ghidra as a data type?
2
Ghidra renaming EAX
2
Is it possible to define an array of variable size in Ghidra (size in the struct itself)
0
ghidra scripting: ghidra unable to resolve string type
1
Ghidra python - get string x-refs in a binary
4
Ghidra + IDA cant detect a string but Radare2 can
1
How to define "code" variable type in Ghidra
0
(Ghidra) How to get the parameter name given a Function object and the storage location as a register string?