I have started exploring COM objects, initially I got to it from UAC bypass methods but I guess my question is general. The general question is: How can I get from (elevated) CLSID in the registry to calling the functions in the COM interface?. Explanation of the research I performed and my specific questions next. I will use IFileOperation COM (CLSID = 3AD05575-8857-4850-9277-11B85BDB8E09) and ICMLuaUtil COM (CLSID = 3E5FC7F9-9A51-4367-9063-A120244FBEC7) as an example in this post.

COM objects are listed in the registry under HKEY_CLASSES_ROOT\CLSID. The default value has the COM name and the server DLL file.

Even after I get the interface name, I have to get the function list and signatures, this can be extracted from the idl file. A great answer presented here shows how to get from an interface name to its function signatures by examining the example code and searching for idl file with the same name as the imports in the sdk folder. I have tried applying similar approach with the two interfaces with partial success.

Other methods I tried are:

My question is how do I get from the (sometimes undocumented) COM objects to concrete interface definition so I could use it in my code? The UACMe project has a concrete definition of the interface for ICMLuaUtil, so there must be a method to obtain it. What are the guidelines and steps to obtain those function signatures?

Now, this can't be a full-fledged answer from A to Z, unfortunately. But for COM there are only a few steps that are really specific to COM.

The project you linked clearly has reverse-engineered the interfaces (elvint.h). What this means first and foremost is that the names of the interfaces needn't necessarily match what Microsoft called them (in your case they match, though). However, if the binaries implementing the respective COM interfaces or their proxy DLL are official system files, PDB files can be fetched for them and even though Microsoft has severely cut down on public symbols, this often allows you to assign more meaningful names to functions/methods.

Of course the author(s) of the linked project already knew what they were looking for and it seems to be system components that somehow "magically" are able to circumvent the typical UAC elevation prompt even though one should expect them to show one.

Now say they found that the Connection Manager configuration (related to RAS) contained such functionality, they'd now go ahead and perform an action that you'd expect to require elevation but which doesn't. Then they'd look up the DLLs loaded into the process and either find an InProc server or a proxy leading them to an OutProc server.

Failing the lookup step they could simply survey all the system DLLs, looking for the typical COM bunch of exported functions (the first being the most obvious):

... and then inspect the version info resource. With the pefile module this becomes a simple Python scripting job. It's basically that first step you always have with RCE: intelligence gathering. It's not strictly RCE (as in sifting through or manipulating disassembly) but it's an intrinsic part of all the RCE jobs I've done so far.

But in your case you already used oleview.exe and therefore knew the most important information: 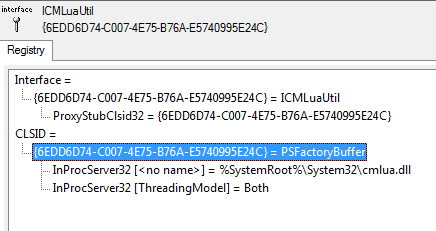 Unfortunately I couldn't do the same thing with ICMLuaUtil as I don't know the interface name, I tried several name variations but got nothing.

Now having found cmlua.dll to be the DLL to implement our (COM) object of interest, we can go ahead and load that into IDA (or another disassembler) and we will get prompted to load the debug symbol from Microsoft's symbol servers.

And once the symbols are loaded we get to see this: 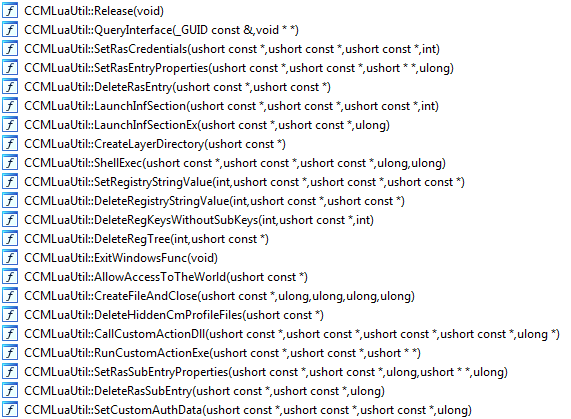 To get the IDL you need to match the vtable of the CCMLuaUtil class to the interface pointer its DLL returns when asked for that specific class. Looking into DllGetClassObject will enable you to figure out the IID.

Now from here on this is going to be the same old grunt job of making sense of the disassembly (or the pseudo code if you can afford the decompiler plugin).

Now if we get lucky we can save a whole lot of time if the COM server (typically a DLL) in question contains a TYPELIB resource, which is the compiled version of an IDL and therefore the best starting point to get to an IDL quickly. For cmlua.dll we're out of luck, however.

Furthermore if you had no symbols like with Windows components, you would have to dig yourself into the disassembly starting from DllGetClassObject which is well-known and well-documented and should be trivial to understand even for the layperson. Going from there and equipped with the knowledge that the three first methods of any COM interface are inherited from IUnknown you'd then try to make sense of the implementation of each method (apart from those well-known first three) and assign hopefully meaningful names to the functions and their parameters. That is: the whole task becomes a bit more tedious without debug symbols, but not at all impossible.

dbh is an utility in windbg installation that can load any binary and provide a lot of static information using it and the command line version of windbg cdb.exe you can get the methods in two commands (notice the method names are demangled)

This is just an extension of @0xC0000022L's answer. For this question, I will explain ICMLuaUtil COM interface below because IFileOperation COM interface is in shell32.dll, too big ;)

You mentioned the wrong CLSID. Here I provide a list of them:

How to find the DLL file path from CLSID without using any 3rd party program? Open this registry path HKEY_LOCAL_MACHINE\SOFTWARE\Classes\CLSID\{CLSID} in RegEdit. For this case, try this command:

The path will be %SystemRoot%\System32\cmlua.dll. Open it in IDA (or any disassembler/decompiler) and load the PDB symbol file. Go to the functions window with Shift + F3 and search for the constructor or the destructor by typing those words in that window. Open that function in assembly view. There must be a variable like const CCMLuaUtil::vftable because you-know-why. Double click on it and you will see the layout of that COM class in assembly view. 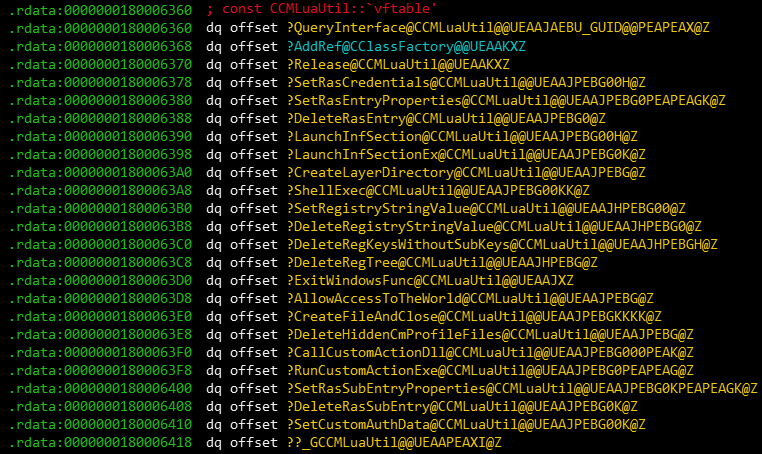 There are many advantages of the assembly view. In the assembly view, all the methods in that class are placed in actual order but the functions windows may not (according to settings). The methods are actually placed as function pointers. For 64 bit binary there will be dq (qword 8 bytes) before every methods (in the above screenshot). The first three methods are inherited from IUnknown interface. If you are writing that class (as struct) in C, you've to include those three.

See another canonical answer for further reference. One can see a real example of this method in my repository GitHub: WslReverse where I showed the hidden COM interface of LxssManager.DLL. Also this video about Practical C++ Decompilation | Recon 2011 | Igor Skochinsky helped me a lot.

Not the answer you're looking for? Browse other questions tagged windows dll functions com windows-10 or ask your own question.

16
COM interface methods
1
What is ObjectStublessClientXX in ole32dll?
0
How can I follow virtual function calls in IDA?

16
COM interface methods
5
IDA Pro list COM methods
1
How to add/find parameters to a function declaration in IDA/HexRays?
4
Load .IDL / TypeLib into Ida Pro
2
How can I enumerate and hook into a Windows 10 RPC interface?
2
Where to get started with reverse engineering a usb video device on Windows?