What is all this code for?

In order to be able to effectively reverse assembly one needs to understand how different compilers work, and what are the common code generation patterns. If you do not know them, you spent much more time figuring out something that is simply an artifact of compiler code generation.

Given the above, I'd like to understand meaning of the following code. It's from lzham_codec library but as you will see in a moment it's not specific to it. I clone this git repo and then I compile the code with VS2015. I set a breakpoint to lzham_codec\lzhamdll\lzham_api.cpp (line 9)

Then I run lzhamtest and the breakpoint hits. I open the Disassembly window, and here is what I see: 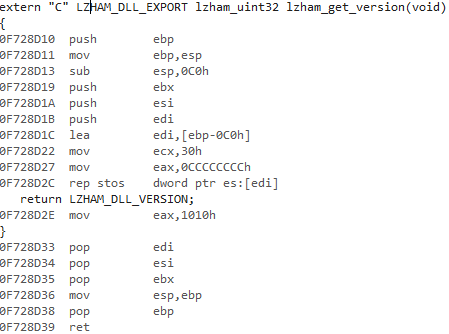 This is an awful lot of code for a function that simply returns a constant. What is all this code for?

I'll assume you have a general understanding of the x86 processor architecture, registers, and how the stack works. If you don't, there are a lot of introductions, tutorials, and books out there, which explain things much better than I could in this post.

The first 2 and last 3 instructions are standard function entry/exit code:

they set up the stack for the function, resp. undo this and return to the caller.

makes space for 192 (0xC0) bytes of local variables on the stack.

The push and pop instructions save registers to the stack that get clobbered by the function, and restore them afterwards:

This fills all local variables with 0xCCCCCCCC, but your C code shows no reason for that. Maybe it has to do with some variable declarations that isn't shown in the code, or maybe the compiler just initializes local variables to 0xCCCCCCCC to prevent "uninitialized variables have undefined values, don't let the code assume they are zero" errors.

which is the return instruction - function results are generally returned in the eax register, and 0x1010 seems to be what LZHAM_DLL_VERSION is defined to.

Not the answer you're looking for? Browse other questions tagged assembly c++ compilers or ask your own question.

2
IDA PRO Basics For Hex Rays How to fix address to struct which is dynamically calculated in if statement
2
Understanding assembly Hello World
0
What does this extra argument for a VLDR instruction mean?
1
Trying to call DLL's functions from my exe
1
What does this instruction pairs mean?
2
Need help with reverse engineering camera-related information in a video game
5
Need help identifying main processor for Roland synthesizer
6
Simplifying assembly
5
How to reverse engineer a setjmp/longjmp sequence?