How to get the file format via Idapython?

I am working on a reverse engineering project on android apk. I would like to check if the file being analyzed is a binary file such as .so file or elf file. Is it possible to get it from idapro?

There is an IDApython function that provides what you're after.

It's called idaapi.get_file_type_name() and it will return the same string displayed in the "Load a new file" dialog: 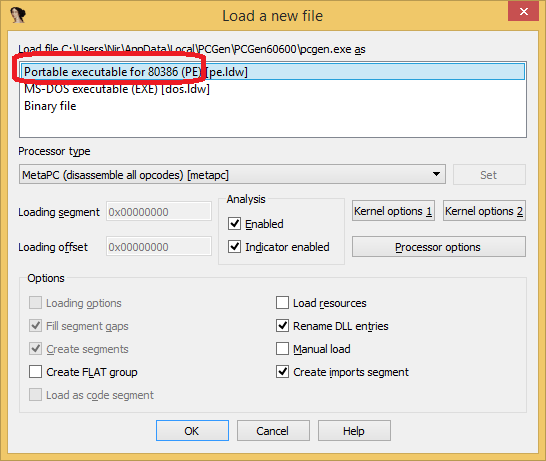 Additionally, there's another function called get_loader_name, which is only accessible through IDA's C SDK and isn't exposed by IDAPython because it wasn't thought to be needed. Emailing hexrays asking it to be included in idapython will probably get a positive response, making it available to future versions.

Not the answer you're looking for? Browse other questions tagged ida idapython idapro-sdk or ask your own question.

4
Decompile ARM native binary - IDA Pro detects file as Shared Object
6
How to get the CPU architecture via Idapython?
4
How Do I get proficient at Reverse engineering?
3
How to get elf header via IDAPython?
0
Is it possible to call function in dynamic link library(.so) generated by Android JNI project?
1
How to find the executable code of the native method in the library * .so? (Android)
1
How to load a color theme correctly in IDAPro?
0
How to parse the NT headers and section headers of a PE file using IDApython?