How to apply IDA structure to a pointer of a structure

I've encountered this function, which accepts a pointer to what I believe is a custom C struct. I came to this conclusion based on subsequent access to it.

and, not too far from above, I see it being populated:

I do not know the size of the structure, but I've seen [ebp+0f14h]. Therefore, I've defined a custom IDA sturct of size 0xF14. Now I'm having trouble with applying this custom structure to this pointer. I've tried Alt+Q then selecting my own custom struct, but it is not working. The output window says Command "DeclareStructVar" failed

To set register as an offset to a structure in a sequence of assembly code, you'll need to select that sequence and then hit T. A pop up dialog called "Structure offsets" will appear, where you can supply the register and structure it points to, and you'll see all references IDA recognized using it. 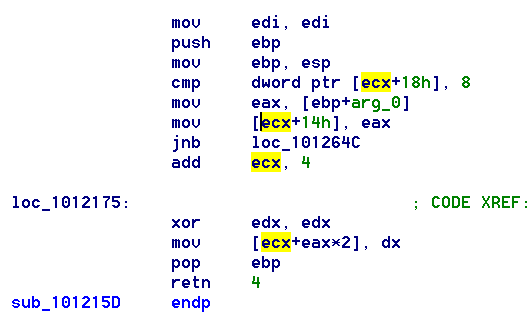 After selecting the relevant code and hitting T IDA automatically identified we're setting the ECX register, suggests possible valid structures to the left and the offsets and the selected structure's values. 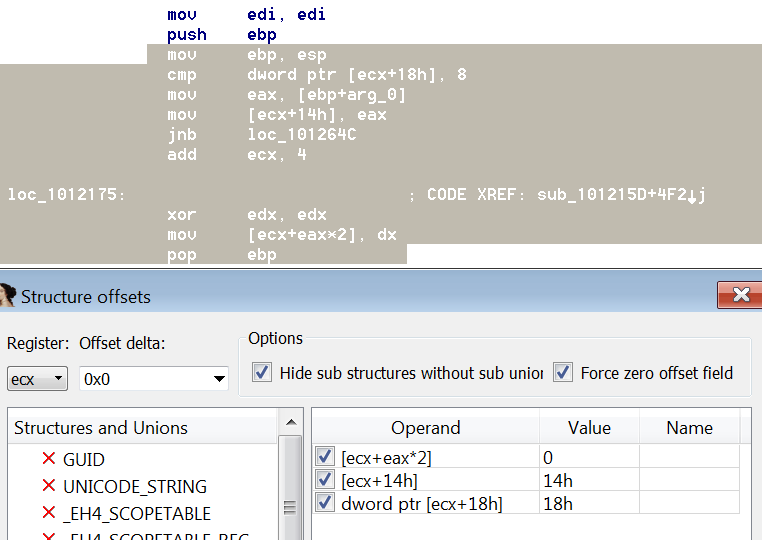 After assigning a valid structure, the code looks like this:

0
How to set a variable as "pointer to struct" in IDA in order to automatically replace offsets by field names?

23
How is a structure located within a disassembled program?
3
When defining a structure in IDA, can I define a field that is of another struct type?
4
Setting an IDA function pointer in a struct via script
1
Competitive Types
1
IDA Pro: how to pass a function a pointer to a structure field
2
How to properly label ALL structure members of C-style struct in IDA Pro
2
Finding the correct input of an executable to print out the flag. IDA 7
0
IDA: apply function parameter as struct pointer