Why can I access FS:[0] in OllyDbg but not offsets to CS,DS,SS?

I can access the FS:[0h] which points to the SEH chain but cannot do the same for other segment registers.What is the reason for it ?

Also,I was debugging an exe which has PTRD at 0x600 and AEP at 0x1000 (same as PTRD) but at offset 0x400 I see some instructions which I have seen in some other files too. In my sample it is unreachable code,but in one test exe which I wrote using WINASM/MASM it was same sequence of instructions just had a bit more instruction .If I change the AEP to 400 the assembly is as follows:

I wrote a Hello world program in MASM which had AEP at 0x1000 the code seems similar but I can debug it i.e it is not unreachable/dead code like previous one.It is as follows:

So my question is how come code is coming in my sample at offset 0x400,what is the use of this code ,is there some compiler which is putting it out there?

Note:Its a virus sample and I am a starter.Thanks for the answers in advance...

In Windows, the total space the process is intended to see is the same in the CS, DS, and SS registers. Windows makes the executable file, as well as any DLLs, open files, allocated memory segments, etc. into this address range, and you'll see the same memory - and the same contents - no matter if you access cs:[something], ds:[something] or ss:[something]*.

FS is different; it's a separate part of memory outside your normal address space. You can't access that memory using either of the normal registers. And its size is only a few bytes - you can't access FS:[100000h], for example, as the PEB isn't that big.

Back to the linear 4 GB space: the fact that 4 GB are "reachable" comes from 32 bit pointers (2^32); but it doesn't mean every address within that range is actually mapped to physical memory. Whenever windows needs a chunk of memory, it selects an address within that space, maps physical memory to it, and uses that memory. For example, when an executable gets loaded, windows will always** load it to 400000h . This is why your program starts at 401000h - your entry point of 1000h is relative to the load address, not to 0. Or, when windows loads a DLL, it will start with 80000000, adjust that value down to below other DLLs, randomize it a bit (for ASLR), and use that address. If your DLL has an entry point at 1000h, and gets loaded at 63000000h, execution will start at 63001000h.

The fact you can't access cs:[0] or ds:[0] is on purpose - windows doesn't map anything to the first bytes of the address space to make your program crash (technically: throw an execption) if it tries to access memory through a NULL pointer. This is, as well, the reason why executables get loaded higher in memory, you don't want a null pointer access to ever succeed accidentally.

The next thing to consider is how windows loads PE files - instead of parsing the file, and copying only the regions to memory that are actually used, it just slurps in the whole file to the start address***. Which means, the PE header gets loaded right to the load address. The pseudo code you've seen is just a part of the PE header that happens to be at offset 400h in your PE file.

To become familiar with memory layout of the "big" cs/ds/ss segment, i recommend the vmmap tool from the sysinternals collection; attach it to some running processes and check their memory map. The details will probably become much more clear from that than from any theoretical explanation.

(**) for a somewhat fuzzy definition of always, the details aren't important right now

(***) Technically, it memory maps the file and relies on the paging subsystem to read it from disk, but again, this isn't important right now.

executable code might start as low as base+0x2b0 if the linker switch /ALIGN:16 is used 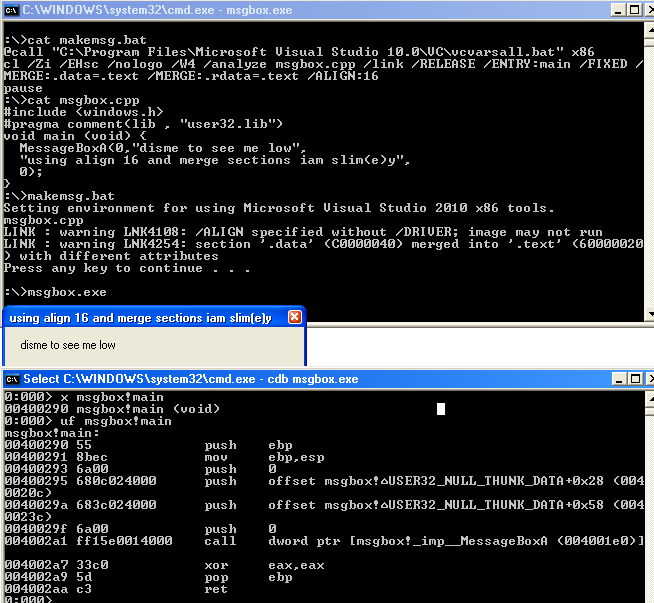 Not the answer you're looking for? Browse other questions tagged ollydbg malware windbg patch-reversing or ask your own question.

10
How to find offsets in OllyDBG from IDA
5
Why was my memory breakpoint not triggered in OllyDbg?
1
OllyDbg plugins not working
1
Recognizing CLib functions in Ollydbg or IDA
3
Ollydbg -how to call procedure in other DLL (in my case USER32.DLL)
3
Manually unpacking DarkTequila, stumped. Can anyone help?
2
OllyDBG saved executable crashes