IDA Pro: Side effects or disadvantages of "Create function"

Some instructions in a binary do not belong to a function, or, IDA does not manage to recover one. See for example the red addresses in the below screen shot.

Yet, one can right-click such 'function-less' addresses and selct Create function from the menu (see below screenshot).

Are there any side effects of creating a function from 'function-less' instructions? For example, does it change instructions, symbols, variables, etc.? Does it change IDA-generated xrefs and thus has an effects on a static control flow analysis?

I am asking because I have to work with an algorithm that can only process instructions which belongs to a function. My idea was to go through the binary and keep creating functions until all 'function-less' instructions belong to a function.

Do you see any possible disadvantages of this approach? 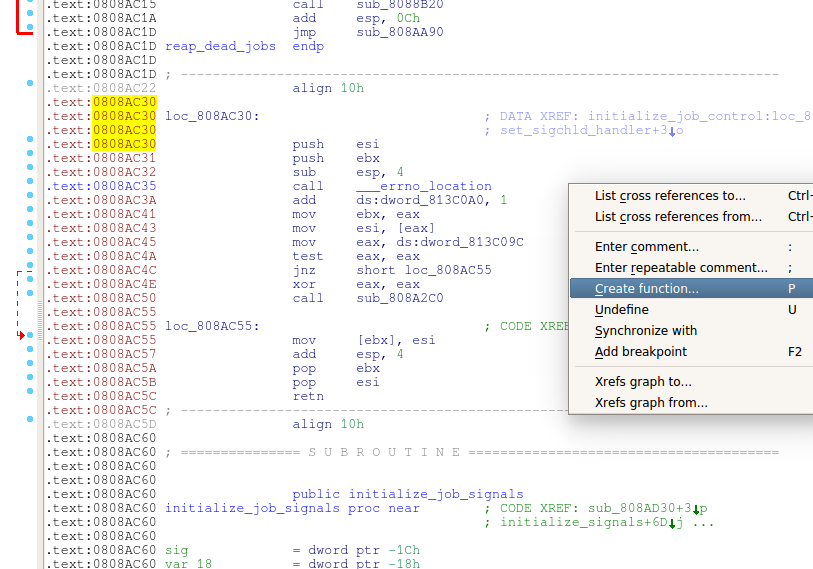 Depends on what you would call a disadvantage. This kind of code-relict often results from a function that's present in source code, but doesn't ever get called*, so IDA didn't assign a name to it. If this is the case, you:

You sabotage this by making unused functions real functions, which may or may not be important to your use case.

(*) However, the function might be a class method, which is referenced from the vtable, but never called directly, which misleads IDA

(**) If you have two functions a and b, both of which get never called from the outside, but a calls b, IDA will still give b a sub_ name, which interferes with identifying unused functions

There is another point that might be problematic. Sometimes on some platforms IDA does not recognize code areas correctly and defines data as a code in complicated functions or complicated code at all. Defining this code as a function may insert it to auto-analysis queue and all incorrectly defined references from this mistakenly recognized code may break another functions. This problem also occurs when working with obfuscated code.

Unfortunately as @Guntram Blohm said, the functions that called indirectly might be not recognized as such, so the solution for this problem is still needed. I'd suggest a bit better algorithm for creating such functions: Don't convert each instruction to function automatically. Find all function prologues instead (for example something like 2 pushes in the functions on your picture), and try to create a function where you can recognize this prologue only.

It can be done with IDAPython by using function idc.MakeFunction(prologue_address) without second parameter. In such case IDA will try to define function borders automatically.

Not the answer you're looking for? Browse other questions tagged ida disassembly idapython static-analysis or ask your own question.

5
IDA Proximity viewer not finding obvious paths?
6
IDA Pro function stack frame view
8
Loading Windows executable - unexpected data appended at beginning sections after loading in memory
1
IDA Pro breakpoints with side effects
1
Correcting subroutine offset in IDA Pro
2
How can I obtain the data of how many memory references are symbolized by IDA-Pro?
1
How to force IDA pro to list some bytes as a specified instruction?
1
How can I make IDA understand this switch statement with a signed jump table?
1
How to convert hexadecimal values to 16-bit Unicode in IDA Pro 7.5?