Let's say I've some function(i.e. hash function), that generates value from input seed and some precomputed hash values, that are stored somewhere in binary. What are the possible approaches for:

I understand that the goal of complete algorithm concealment from reverser is impossible but what technique will raise the efforts to do this?

My thoughts on this topic:

Maybe anybody have better concepts that will suit my goal and be so kind to post it here.

P.S. please do not advice to use packers/protectors. False positive AV does not cost couple functions algorithm concealment.

Here is the implementation if string protection written in C++. I don't know if this solution be useful for other people but it's worth mentioning though.

binary-analysis obfuscation static-analysis encryption
Share
Improve this question
edited May 4 '15 at 21:53
see ya
asked May 2 '15 at 18:53

Instead each character can be offseted by some offset like by table mixing all the strings together. For example you got 0123456789 if you store them in memory like this:

where x is anything or another string ... it is pretty hard to get the meaning.

Next level is even better

So create offset table on runtime which will randomly map linear string offsets to nonlinear offsets. This is very hard to decode because it mixes all strings together (and if they are hashes) then without stepping is almost impossible to decode this (not knowing what it does of coarse).

Here an example of how to use it and how output looks: 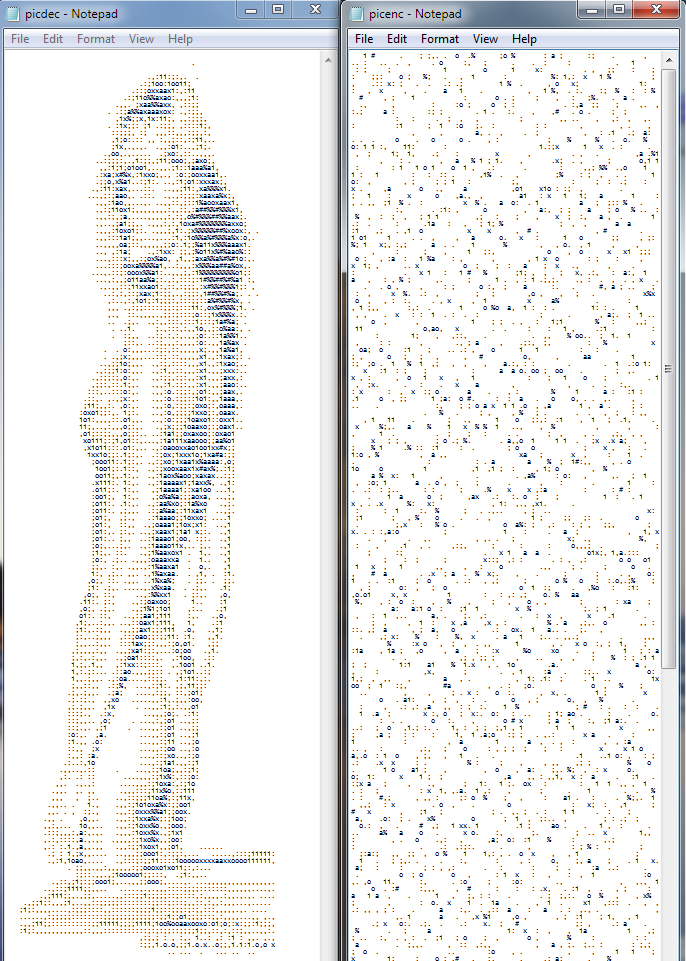 On the left is decoded text picdec.txt and on the right is encoded text picenc.txt this is how the strings looks in memory.

On top of this you can add any kind of encryption (not only to text itself but to offset table also ...)

There are a number of ways to accomplish what you've stated. Generally, more robust techniques, while affording a higher level of protection, will also put more burden on the programmer creating the software. So in approximately increasing order of difficulty, here are some ideas:

The simplest approach is to simply not store the data contiguously. That is, store the data in separate pieces and reassemble it at runtime just before you need it. With this as with all of the other techniques, it's generally recommended to keep the value in memory for as short a duration as is practical.

There are many ways to obfuscate data. One simple method is to simply XOR with some fixed constant. A more sophisticated approach is to encrypt the data, but unless you have some secure way to store the encryption key, this might not actually offer that much more security. One possibility would be to use a cryptographic hash of the entire program (minus the protected data) as the encryption key. This would largely prevent alteration of the binary as well as providing a non-obvious way to store the key.

Recalculate the data at runtime

If you can avoid storing the data at all, we eliminate the problem of being able to derive it from static analysis. If you are precomputing hashes of certain data for performance reasons, consider doing so at program startup instead of at compile time. Alternatively, if the data is fixed, consider writing a polymorphic generator which could be included at compile time. That is, write a program that takes a fixed constant and generates code which, when run, produces that value without explicitly including it. Then link the generated code with your program. Because the polymorphic generator would be part of the build process rather than part of the runtime, it is much less likely to trigger a A/V warning.

Proof of concept for this idea

I wrote a little program in C++ to more fully demonstrate this technique. Here is the program:

This is a very simple program that takes a series of integers as input and creates one linear function per integer. For example, with this command line:

The program generated the following output:

The asserts are simply there for documentation and testing. In real usage, if you want to recreate the constant 39181 in your code, you would use generate1(32308). If we rearrange the lines into a full program, we get this:

Obviously, you could multiply or concatenate these if you need longer numbers or strings, and my choice of linear functions with the random number value range I chose was entirely arbitrary. Feel free to substitute and experiment.

Depending on the environment, it may be possible to store the data remotely and then fetch it securely via something like HTTPS when and as needed. Be aware that doing this could also mean that even an ordinary network outage or misconfigured firewall would render your software inoperable, but you can decide if that is acceptable for your purposes.

Not the answer you're looking for? Browse other questions tagged binary-analysis obfuscation static-analysis encryption or ask your own question.

1
How to store a string securely inside your app?

4
Modifying a binary save-data file for a video game with a CRC/Checksum check
2
How to retrieve stored information, NAND filesystem with VB.Net
0
How would you protect this Crypter?
1
extracting data from binary file
1
Do TPMs Send Stored Keys in Plaintext?
2
Decoding binary data structure
1
What is the difference between stripped binary and obfuscated binary
1
Best way to protect source code of exe that being loaded by Assembly.Load method