Ollydbg does not find all referenced strings while Reverse Engineering AoneVideo2AudioConverter

I am following this tutorial on reverse engineering. In the step where I "search for all referenced strings" I get a window as follows: 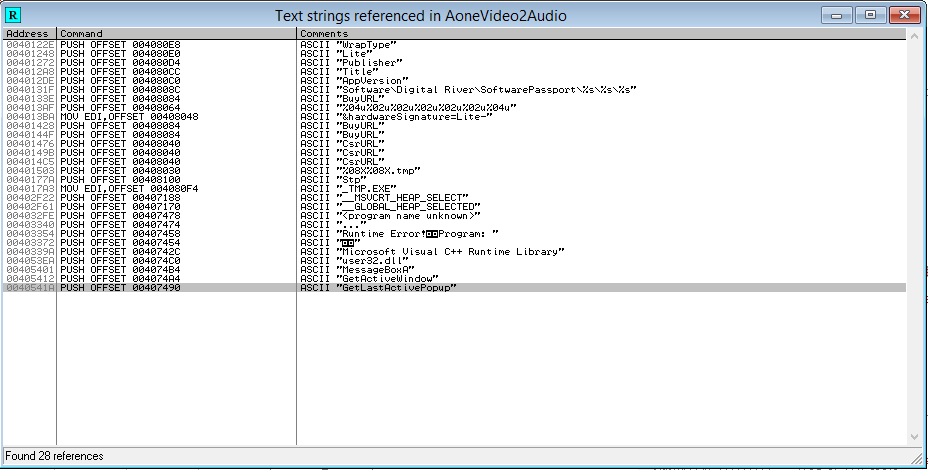 When compared to the image on the tutorial for the step, I found that the column headings of my window are : Address Command Comments where as according to the tutorial it is supposed to be: Address Disassembly Text String (It is not seen on the tutorial but I dig the internet before making this post).

I am using Windows 8.1. I have run Ollydbg as administrator with compatibility mode for Windows 7 and Windows XP SP3, used Ollydbg 1.10 and 2.0 but I get same results. The module loaded is also the correct (not the ntdll). The exe version is a different one but I installed it and the overall functionality of the new version is still the same - gives out the exactly same error message for invalid registration.

What am I doing wrong/missing here?? What might be the reason of this and how can I overcome it?

There are a lot of way to hide strings to the debugger. A simple encryption at runtime can daunt new reverser to work on it.

Try this plugin sometimes it helps to find strings that Ollydbg doesn't show:

If also with Ultra string reference you don't get results, run the software in the debugger and then search for the string in Memory, then you can Memory breakpoint that area and understand where the software work with it and if there are encryptions to defeat. 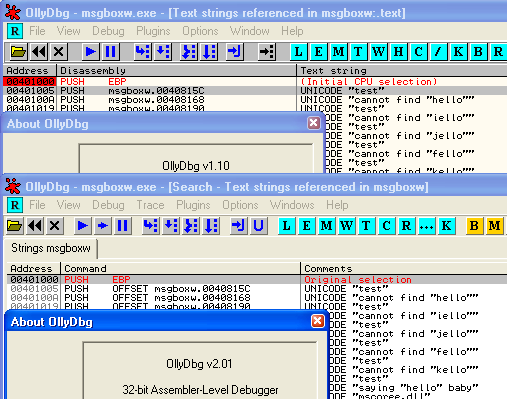 Not the answer you're looking for? Browse other questions tagged disassembly ollydbg executable patch-reversing or ask your own question.

7
Issue opening executable module in OllyDBG
5
Why was my memory breakpoint not triggered in OllyDbg?
2
OllyDbg 1.10 - attaching to running process suspends it indefinitely
3
Why doesn't Olly's analyzation work properly in this code section?
5
Are there any modern assembly-level patching tools?
4
Can't find “referenced string” in OllyDBG
5
In Ollydbg, how do I change the path to a source code file without recreating entire directory structure?
2
Reverse engineer a checksum algorithm from application
1
Call DLL export in OllyDBG