"Debugged application has modified the debugging registers" with ollydbg 2.01

I have the following problem. When I open a sample with ollydbg v2.01, then I get that message here:

What does that mean? How can I fix it? I did not change any options such that I use the default configurations.

edit: As I try to describe it in the comments, I can open the same sample in ollydbg v1.10, but not in ollydbg v2.01. I mean, I can open it in v2.01, but it starts at a RETN instruction & process terminated. Now, I have read at http://www.ollydbg.de/version2.html that olly replaces ZwContinue() with the INT3 instruction. I compare the opened sample in v1.10 with the sample in v2.01 and yes, in v1.10 it has a lot of INT3 instructions, but in v2.01 there is INT3. As I also said below, I need v2.01 because of the Debug child process option.

What are the debug registers

The technical meaning of this warning is simply that Olly noticed the program you're debugging changed the CPU's debug registers. These registers are available to facilitate CPU-enabled debugging. The original use case is speeding up debugging efforts by using these CPU specific features.

There are some broad advantages for using the debug registers by debuggers in general and for anti-analysis executables in particular.

bullets 2 and 3 might seem the same, but although achieving a similar goal the cause is completely different.

Difference between Ollydbg1 and 2

Olly v2 started using debug registers by default for it's own debugging efforts. This wasn't too common for anti-analysis specific debuggers such as olly previously, which proved quite helpful at the begining and was a decent idea. It's important to note olly1 exposed debug register usage, but it had less of a focus and wasn't the default behavior.

This can be turned off by un-checking this checkbox: 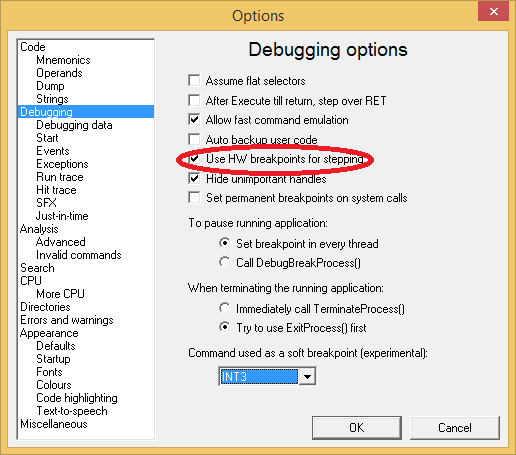 I have encountered this issue too. In my opinion, it may mean the debuggee applies some anti-debugging measures, BUT it must NOT mean that. For evidence, I've tested it with some PEs that cannot contain any anti debugging measures. I used Olly v2, and in settings I made Olly to stop on System breakpoint when starting/attaching applications. If you know the book Practical Malware Analysis (PMA), I've loaded Labs 20-01, 7-2 (just randomly) and set hardware breakpoints on entry point and some other locations. And I had the same issues - the breakpoints have been modified to zero.

Not the answer you're looking for? Browse other questions tagged ollydbg debugging debuggers anti-debugging or ask your own question.

3
Command for Command line plugin does not work

4
What ways is there for an application to detect that it has been modified?
3
What do the first 16 bytes on the stack represent?
1
OllDbg error message
1
Defeat QueryPerformanceCounter as Anti-Debugging trick
1
Reaching an address with ollydbg
3
Command for Command line plugin does not work
0
Is it possible to find the changes of the debugged .exe file ollydbg?
1
Log modified memory locations when tracing with Ollydbg