Working with multi-threaded program but can not find created thread

i am analyzing a piece of code in which the main thread does the following steps:

So, what I did was: I set a BP at ResumeThread(), let it run, after hitting the BP I step over the ResumeThread()-function and open the window where all threads are listed by clicking on the big "T"-button in Ollydbg.

But there is only the main thread, not the newly started thread. And now I have a couple of questions:

1st question: Why it is not in the list ?

As you said in your post, you are seeing the process's main (primary) thread, on which the *Thread*() API functions above acted. No additional threads are created so you shouldn't expect to see additional threads in OllyDbg's view.

2nd question: How can I find it?

Is there a way to analyze the new thread starting at 00401E1D in a separate ollydbg-session ? 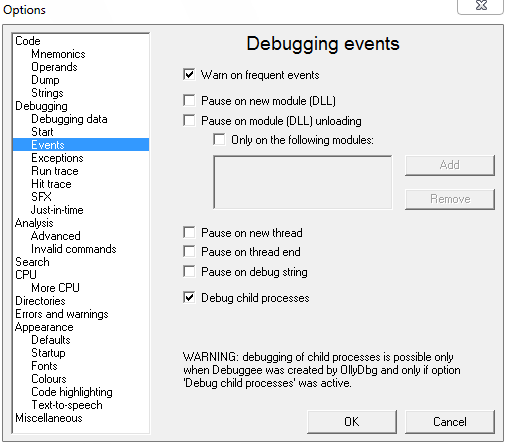 Not the answer you're looking for? Browse other questions tagged ollydbg thread process or ask your own question.

7
How can I find the Thread Local Storage (TLS) of a Windows Process Thread?
1
After a CALL instruction, jumping to RETN
3
Why doesn't Olly's analyzation work properly in this code section?
2
Changing start address of thread using combination of Get- and SetThreadContext?
0
Running thread without process - special case
2
How to go back to main thread?
2
Analyze a created thread after main thread
3
Dump a child process created by malware with an ALTERNATIVE process hollowing process