I've added some functionality to existing application which works through dll injection - my dll loads and patches some stuff.

I would like it to be added to this application permanently so I don't have to inject it manually every time - I know there are some solutions such as:

But are those options most optimal? First and second requires some work (maybe there are some already existing tools of which I don't know and which allows it? so I don't have to prepare it all myself), and third seems a bit over-excessive. Just to expand my knowledge - what are the other options?

You could also add the DLL to the EXE's Import Table. This has the benefit of not loading the DLL into every process that loads user32.dll (which is an issue with #3), and you can do this Import Table addition easily with a tool like IIDKing: 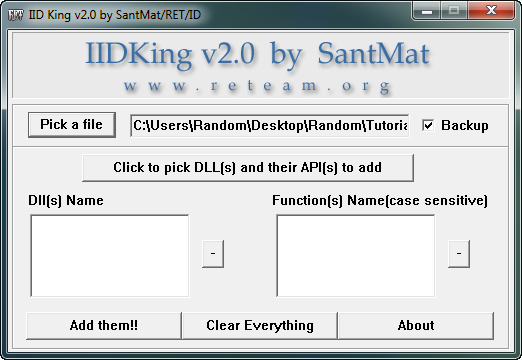 Here's what i did some time ago, when i had your problem.

Note this depends a bit on how many DLLs the executable program imports, and if you find one where you don't have to "simulate" several dozen API entries, or resources, or whatever can be linked to a dll.

After finishing my post, i found Jason's answer, which seems to be a bit more professional and easier. But, at least, my solution needs no tools except a hex editor :-) 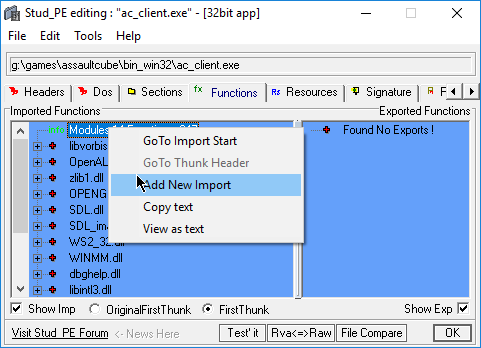 Strange as it is, two other methods have not been mentioned. The AppInit_DLLs approach you mentioned doesn't work anymore to the best of my knowledge. At least not as easily, especially when UEFI Secure Boot is enabled.

In both cases it depends on the target binary, so let's go through it.

I've run this in the past on Windows 7, but the rules have changed since then. The way I made it work was as follows. I figured out one (vendor-provided) DLL loaded by the program without a full path (I picked the one with the least number of imports). I then wrote a stub DLL which would simply pass through all function calls to the real DLL (loaded by full path) and print out useful info for me. The return value would simply be returned.

It's easy to figure out the function prototypes of exported functions, so this was the lazy option for me.

This method is used by Process Explorer to make itself a replacement for Task Manager. Here's how that looks in action:

Now the value name probably gives it away already, this was previously used for a totally different purpose.

Either way you can (ab)use it to achieve what you want. You write a little stub loader, acting as the "debugger". There isn't much to it, you don't even have to implement any of the debugger APIs, although you could.

All you'll want to do is to use CreateProcess or similar to create a process with its main thread in suspended state upon "start". You can pass on the command line arguments as you wish (although it is, admittedly) a bit involved with CreateProcess and friends.

The suspended main thread is where you can detour to your own code ... typically a simple piece of shell code that does nothing other than load your DLL and then return to the original entry point. Et voila, you have loaded your DLL into an application.

The nice part about this second method is that it scales pretty well, since you basically only have to write this sort of "debugger" (loader) once. So it can be kept generic.

This method amounts to doing (from the command line):

... except that to the user this will be transparent. And I think inside your loader you can even use argv[0] to get the path to the hijacked executable, IIRC.

Now you may think that this is some weird security issue and wonder why it's gone unnoticed. It's not a security issue insofar as you have to be privileged to set the ImageFileExecutionOptions in the first place.

As a side-note: I think it's even permissible to name the containing key (taskmgr.exe in the above registry file) with the full path to the executable to be hijacked.

Another program which can do what you're looking for is CFF Explorer: 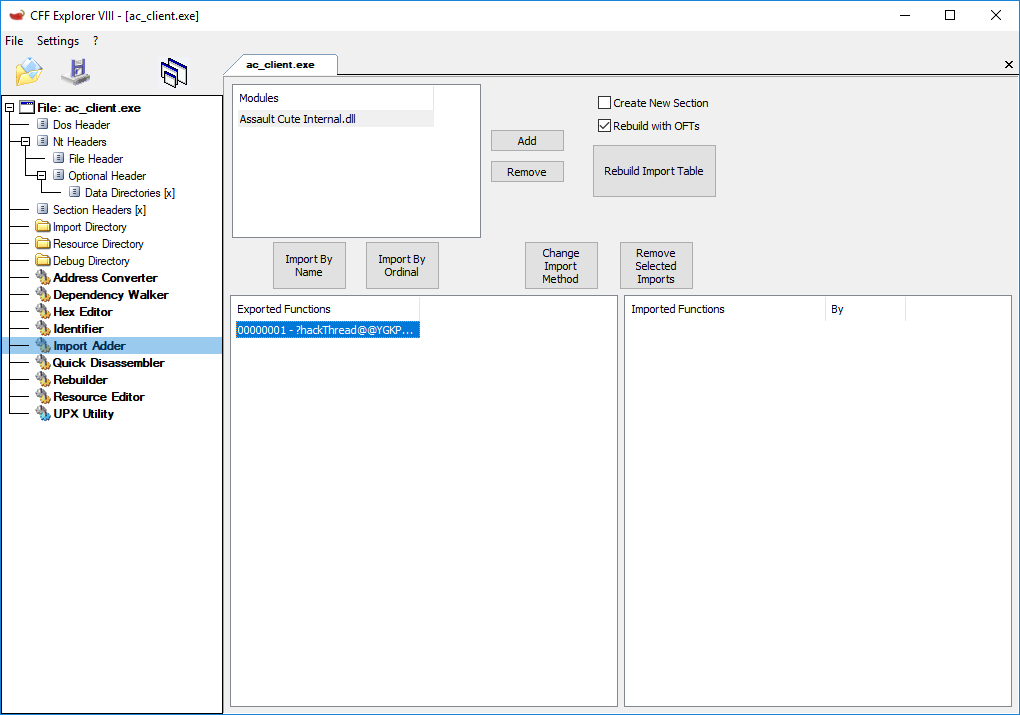 Not the answer you're looking for? Browse other questions tagged patching or ask your own question.