I've decompiled it successfully with FMK v0.99 and got the header.img, the rootfs.img and the footer.img image parts.

This is the binwalk of rootfs.img:

I decompiled the rootfs.img with unsquashfs succesfully and got the system folders. I made some changes (enabled a shell on telnet) and tried to repack everything with the tools provided (the ./build-firmware.sh command).

The final firmware size was bigger than the original one. Tried to falsh, nothing happened. I analyzed the firmware and especially the upgrade method to learn how to properly build the firmware.

I found the update.sh file which handles the upgrade process (analyzes the file provided by the user and flashes only if everything is correct, in order to prevent brick)

Here is the link to the pastebin of that file

I'm pretty sure that the original firmware files are parsed through the parse_yaps_image() function, so I tried adapting on my own to check the files but I noticed that there was an external check with a binary file called sig_verify

If the files doesn't exists another function is invoked, the problem is that the function provided isn't correct (it return a wrong validation token error even with original firmwares!)

My goal is to analyze the sig_verify file and look for the algorithm, in order to understand the composition method and in order to flash my router in the proper way and finally get the root shell (and make modification on everything I want)

I uploaded all files on a Mega folder so the interesed guys who wanna help me could access any file needed.

I included in the folder 60208 the two scripts I used to check the files.

And here is the binwalk of sig_verify file.

As you can notice it's a MIPS executable. I tried to run it under a MIPS envirronment (virtual machine, qemu-system-mips) without any success.

The kernel and the initrd were downloaded by http://archive.debian.org/debian/dists/etch/main/installer-mips/current/images/qemu/netboot/

Any help would be appreciated. If someting isn't clear just let me know :)

Decompiled... Anyone that could translate machine language into human-comprehensible code? 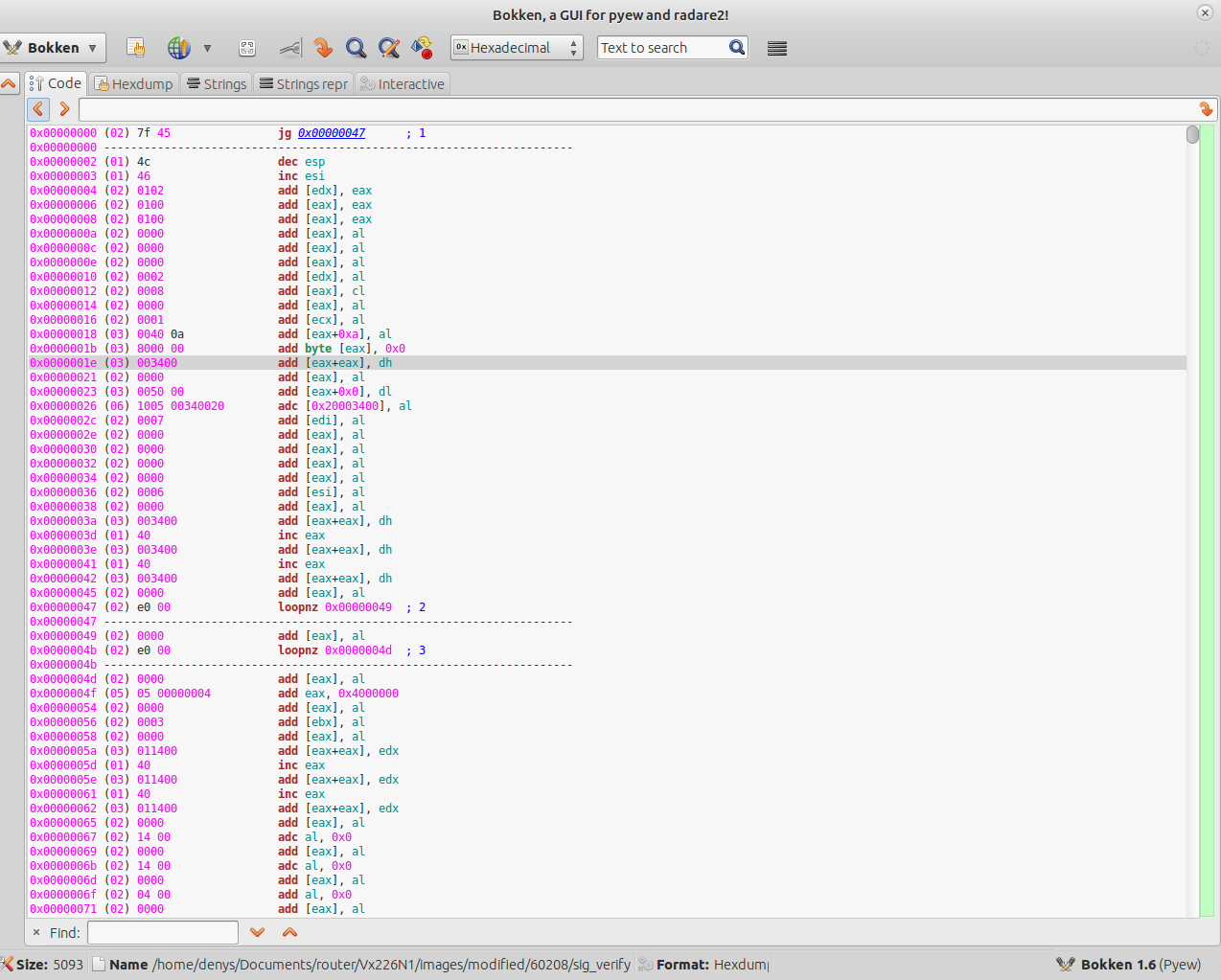 Interestingly, both the online disassembler and retargetable decompiler choke on your sig_verify program, and objdump says it has a corrupted section header, while Ida can read it without any problems.

It seems to me that the vendor uses some private key to sign the firmware file, and has the flash process check the file against the corresponding public key, which would make it very hard to create a valid replacement firmware. HOWEVER, i only looked at the function names and strings and didn't try to understand every byte of the functions, so i might be wrong.

I don't know if my IDA license allows me to make the disassembly public, but i'll check this and, if you're interested and it's ok with the license, upload the disassembly somewhere so you can investigate further.

4
Unable to unsquash from a firmware dump