So, I've been working on reversing several file formats from the Nintendo DS game Pokemon Mystery Dungeon: Explorers of Sky.

So far most formats were pretty easy to reverse, until I stumbled on a compressed format using a header I've never seen in any other compressed files in other games on the DS so far (I'm not all that experienced in reversing).. 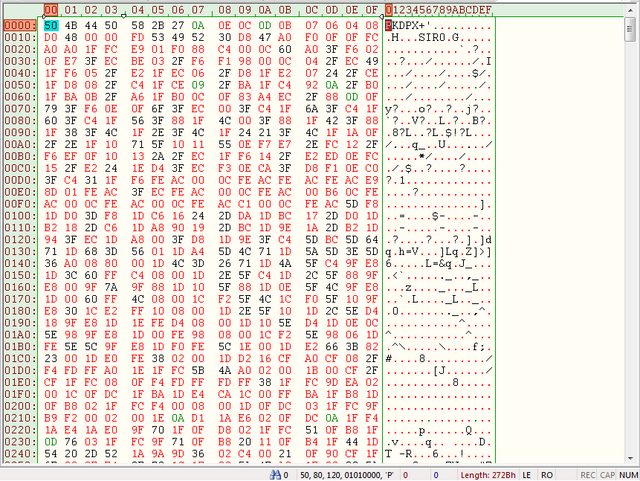 The 2 bytes right after the magic number is the file length. Its a little odd to store a file length on only 2 bytes though. Especially when every other format I've seen this far uses mainly 4 bytes integers... And I'm wondering if it couldn't be an older compression format used in GBA games. Given that a lot of data from the previous game, for the GBA, was re-used in this one.

However I'm still at a loss as to how to deal with this format. I haven't found anything from the NDS hacking scene about those, besides people mentioning they never saw that format before, or on the contrary, people just talking about it as if it was a very obvious format.

From what I know, NDS games are known for using huffman and lz compression, or even rle, but I really doubt this is rle, given its probably not an image, and I doubt a pure data format would see much advantage from having rle compression applied to it.. But, I'm not an expert on compression, or I wouldn't posting this here XD.

One thing to note is the SIR0 magic number down there, 0x53, 0x49, 0x52, 0x30. SIR0 is a format I'm familiar with, right after the magic number there are 2 4bytes pointers that points to some file structure related data at the end of the file. Thus if those aren't too mangled, just like the SIR0 magic number, it could give a decent idea of the decompressed file size, give or take a couple hundred bytes.

However, right now there is no indication that those weren't mangled, or where the first value ends and where the other starts...

Any tidbits of info would be welcome at this point !

EDIT: I also found out that, the DS has built-in LZ10 compression handling, however its common for devs to make their own "custom" compression and do it themselves. But, given it was made near the end of the DS's life cycle, it might just be "custom" LZ11, LZSS, or another variant..

Browse other questions tagged file-format unpacking or ask your own question.