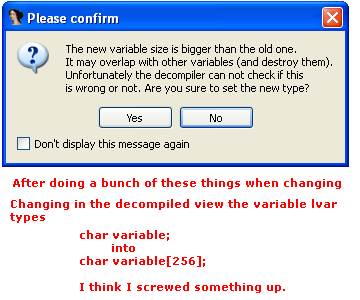 The code of the functions is still valid but now the _data segment keeps losing 6 bytes everytime I fix it by pressing G going to 42A000 fixing what it undoes then I scroll down a bit and scroll back up and I'll notice 42A000 is completely gone when I go into Hex View I'll notice it doesn't show the 6 bytes.

Also going bit lower I noticed my string started to get lost too when I started I had a bunch more strings then I have now the first string is cut half way with a bunch of fake assembly code.

My strings keep disappearing one by one each time I work on re-factoring it.

Is there a way to re-position / move this string / constants information or maybe keep it blocked from being de-synced.

Whats the cause of it? I checked all the functions I've edited they all start and end with the same addresses as a fresh original none re-factored load of the same file.

Here's a few pictures of the problems.

There are the errors in the output that get generated as I scroll down. 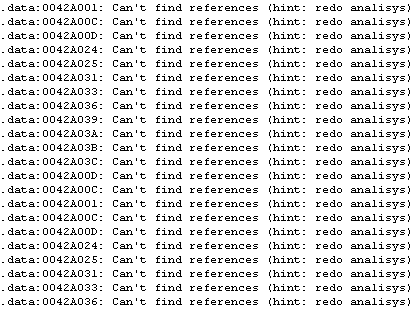 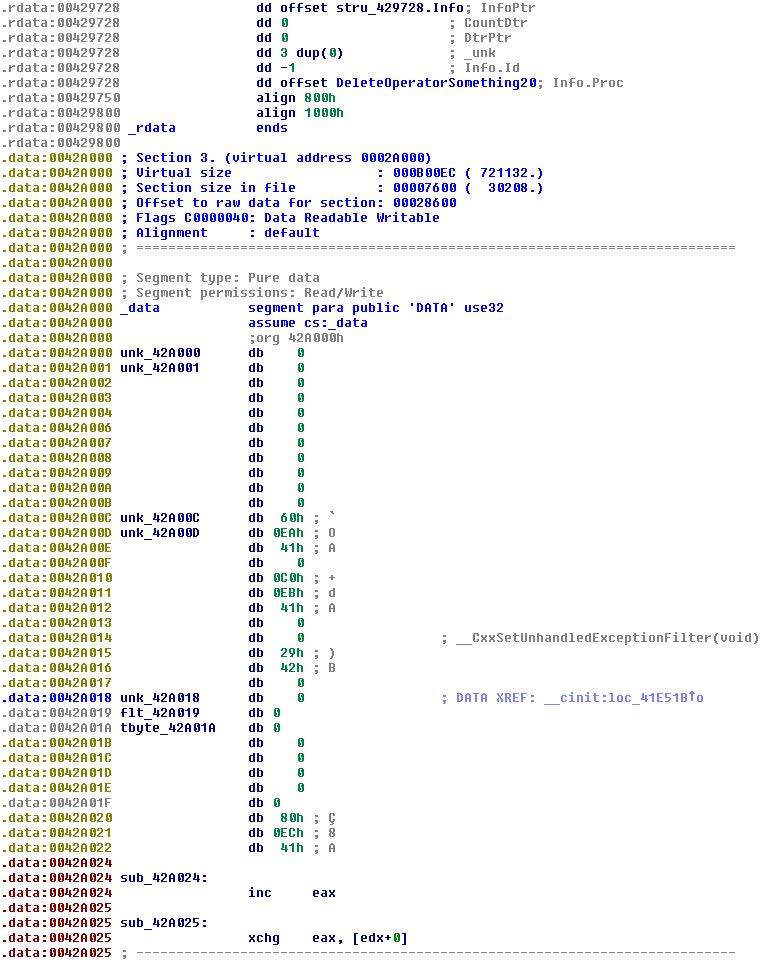 This is what happens when I scroll a full screen view away from 42A000 then come back 6 bytes are lost. I'd like to add that align 800 I've added it only had align 1000 but that's because there was a bunch of zero bytes there so I guess the align just hides em for now I'll use them if I need to later. 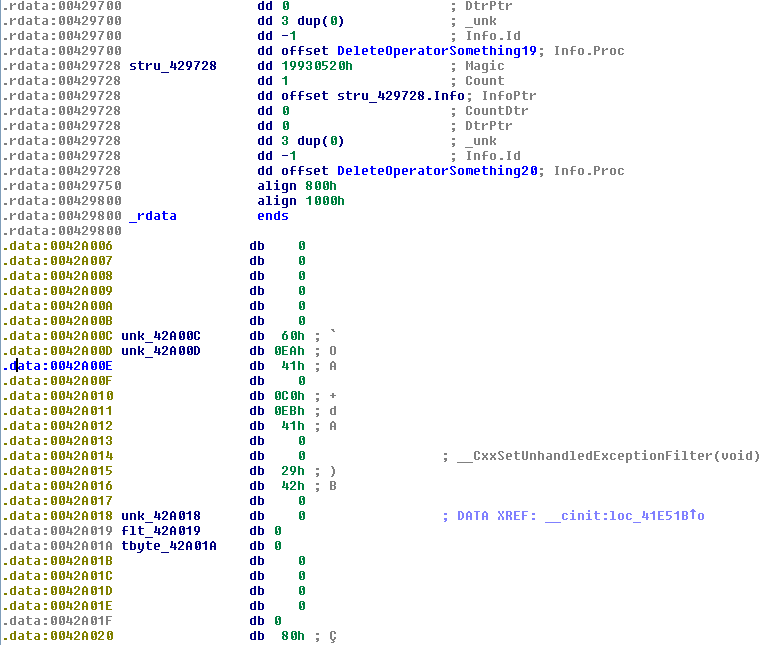 Here is the Hex-View after a screw up, you can see the first 6 are not in use. 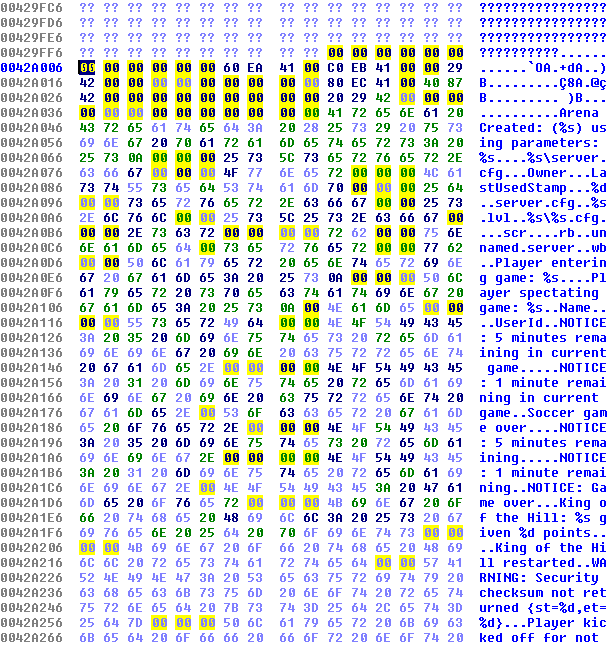 Here you can see the first String is Player leaving game %s',0AH, 0 which isn't even on the strings of the Hex-View above that's how much strings are lost so far. 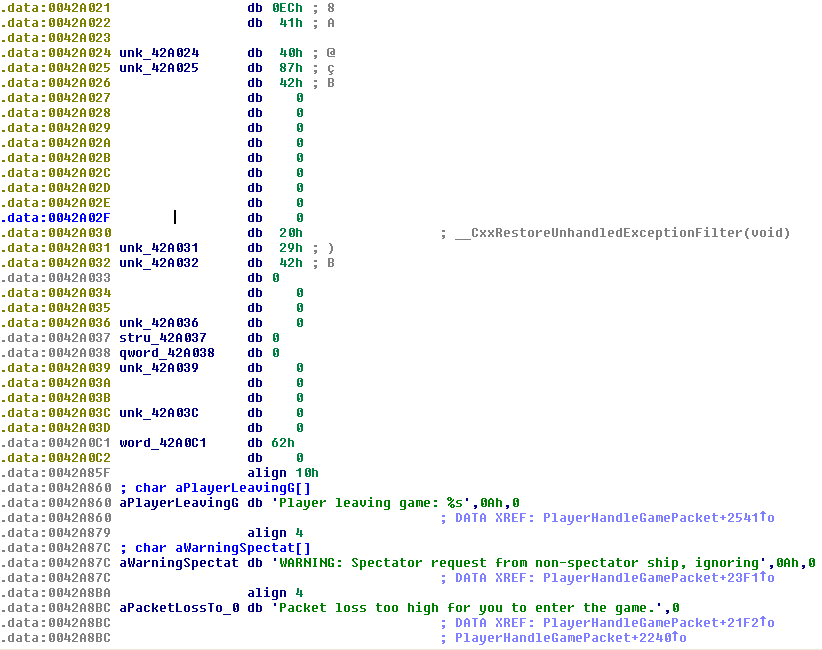 When you scroll down far enough then scroll back up it even makes more of a mess. 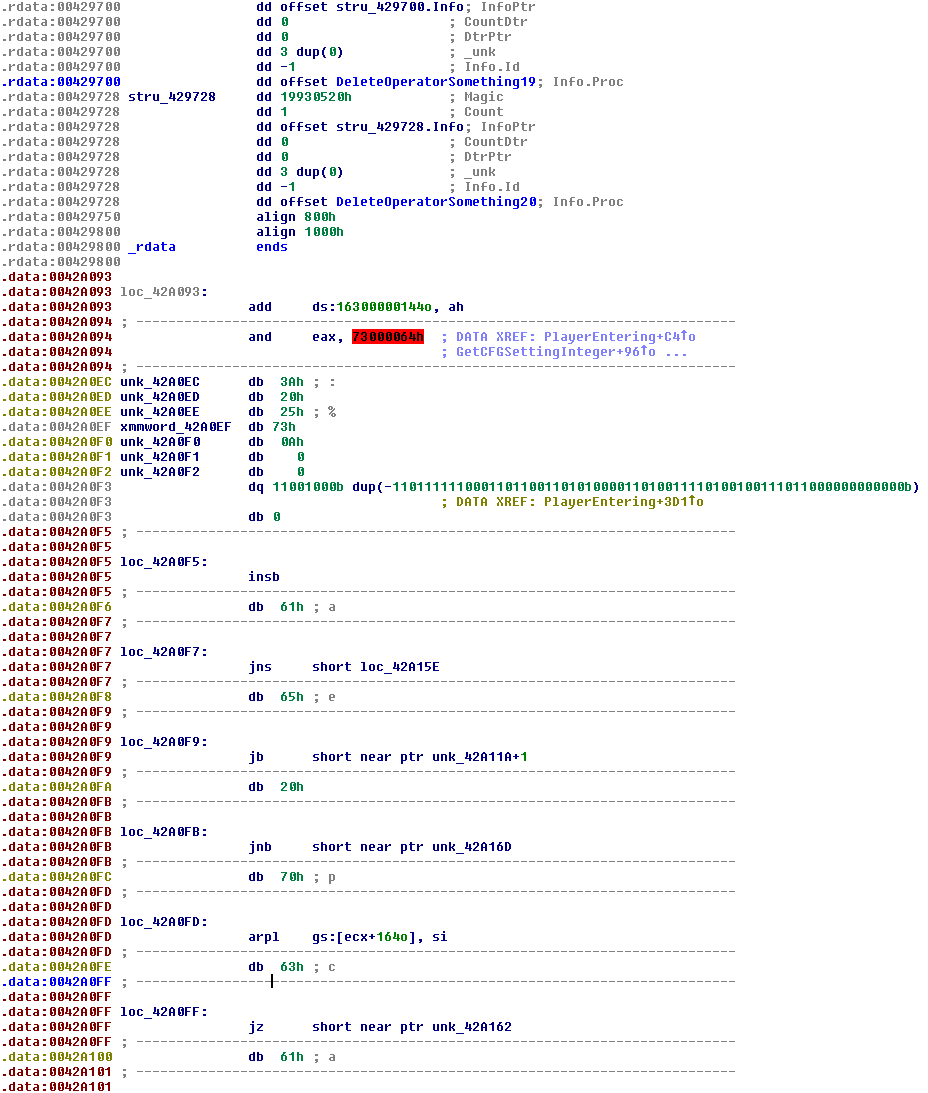 Any advise what I should do? I'll probably start from a fresh revision of the exe and slowly start fixing things up and looking at the bottom each time to see if anything messes up. Or is there a way to find out what screwed it up? or maybe a way to prevent further screws up in the future? to be honest I recall it screwed up on a fresh project as well just the first time it messed up it just kept undoing my changes with Keys A's and O's and D's

"redo analisys"? Why is a commercial product misspelling "analysis"?

I would suspect hardware or serious software problems. Do you have unexpected computer crashes? faulty memory? corrupted disc structure?

If none of those, and in the absence of any better advice I would reinstall IDA, check your hard drives, make sure you have sufficient RAM that is correctly configured in BIOS and check your IDA against a different project.

4
IDA PRO repairing stack variables / local variables hex-rays with arrays and proper types / structures any scripts/plugins?
4
IDAPython Strings constantly returns NoneType with str()
3
Colorize and disassemble byte sequences with IDA Pro and IDAPython
0
Searching for a sequence of bytes in IDA
0
IDA freeware (v7.0) exporting Hex-View A
1
How to determine what code created a string, in a live debugger session?
1
Find Nearest Address Which Has XRef in IDA