This file format has a companion index/reference file which is a simple dBase III. The working platform is DOS/Windows.

I spent 2 days tried to understand the format. While still far from the full picture here are what I've got:

Progress The python lzw seems to be relatively recent. So I looked into older LZW implementation in last century. So I found the lzw module of libtiff, and it's python implementation. (have to use the bitarray module inside of it: ver 0.35 instead of the most recent ver). I tried this python library with the brute force method (thanks to @Attila), the blob is indeed decode-able from 28h (based: "AS LZW"). And most importantly, the decoded starts with "AC10", AutoCAD DWG format! However, it only decoded around 30% of the blob.

Progress 3 The dwg decoded with python LibTiff LZW is a valid AutoCAD DWG. AutoCAD 2014 reported the one decoded from golang LZW invalid. Now I guess the rest part of the blob is image thumbnail of the vector. Will decode all 50 blobs and report back.

The blobs decoded with the libtiff lzw (lzw.py) are not valid although they have correct header "AC10".

I looked carefully into the lzw.py inside of pylibtiff, and found the first two lines:

""" Encoder and decoder of Lempel-Ziv-Welch algorithm for TIFF.

This module is obsolete, use tif_lzw extension module instead. """ (lesson learned: read every line!)

So I modified my codes to use tif_lzw to decode the blob. No luck. This time, I read the code carefully, line by line.

At the first glance, the file has two more Python wrapper methods Py_decode and Py_encode. Then I noticed the disabled methods LZWDecodeCompat for Old-style LZW codes. It's kind of interesting. So I modified the module, enabled LZWDecodeCompat and use it in the Py_decode method. the tif_lzw.decode method requires an extra parameter size. Naturally I used m1 (for the first blob, i used 0x4c07). The decoded result have "AC10" header, and opened successfully in AutoCAD(mac ver) but show nothing. AutoCAD says it's a Trusted DWG and contains 1 block which I couldn't find. So I spent a good few hours installed Windows and AutoCAD. bingo! there is a column drawing! There are still remaining questions. e.g. still not able to find the right size for tif_lzw.decode method call.

progress decoded all 50 binaries with:

Consider changing your Python script to run LZW decompression from various offsets, that is in a brute force manner.

NB: Only writing this as answer because it's too long for a comment. I think given the bits and pieces of information there is no answer unless you get lucky and someone happens to know this particular file format.

If we assume that the file format has indeed something to do with DWG, we can learn a lot by looking into old or new specifications (Google-search for OpenDesign_Specification_for_.dwg_files.pdf) for DWG and finding out about their used file format. Of particular interest are the data types (see "BIT CODES AND DATA DEFINITIONS" and "Compression" of the linked paper) and algorithms. For example in the mentioned section we find:

The AutoCAD DWG file format uses a modification of a standard cyclic redundancy check as an error detecting mechanism. The CRC ends up being 2 bytes long due to a lookup in a table containing 256 16-bit values, and are not stored in any sort of bit code form. They also always appear on byte boundaries; they are not embedded within the stream of bits.

This is pretty valuable information and helps you confirm findings.

Also interesting, assuming that this holds for your case:

Autodesk also uses a method whereby the result of the CRC is XORed with a "magic number". This method is used extensively in pre-R13 files [...]

BricsCAD and others provide SDKs and libraries (and products) which they claim understand also old DWG formats.

But back to investigating the format yourself.

You'll want to get handy with a tool such as 010 Editor that allows you to create a template and literally develop your understanding of the file format this way.

Now, you have deprived us of vital information by stating that the first line is text but not giving a length or anyway an idea how you come to the conclusion that it's plain text.

There are for example 50 occurrences of AS LZW 1.0 in the file. Still, I count more occurrences of the mysterious ASCII numbers at the beginning. Possible that this counts some markers as well that aren't in need of the AS LZW 1.0 bit.

Also those decimals start out at 2. Why?

I'm also unable to follow your description, to be honest. If the first part are file names and they are separated by 00, then why are there so many occurrences of 00 in that part?

ArchStar explains the AS LZW 1.0 of course. It's probably a variation on the "normal" LZW then. LZW could of course also stand for something unrelated, like the author's initials or their name for something.

Concerning the update about CEL/FLIC files. If we assume that the information here is correct, we should see something useful here. But it looks like gibberish indeed. 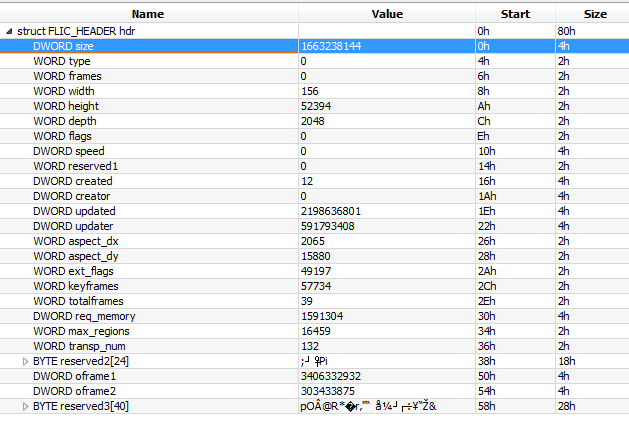 So I agree, likely no FLIC file. Still, keep in mind that DWG comes from the same creator. This may not be a coincidence.

Update concerning the findings about the LZW data. From Wikipedia (here):

Not the answer you're looking for? Browse other questions tagged binary-analysis file-format or ask your own question.