What's the format of Mediatek MRE VXP file and how to create a workable VXP binary?

MRE's executable file has the extension vxp (I don't know that it stands for).

The problem is, MRE SDK isn't supported anymore (people have claim here that it's a market failure on S30+ platform), and the website, including the SDK, documentation, forum, disscussion and other things were totally deleted from the Internet (Wayback Machine archived some of the pages but not all).

Luckily, using this man's copy of MRE SDK 3.0, and using ARM RVDS, I was able to compile a simple 'Hello World' application for MRE (you can download it here).

I copy the vxp file to my SD card, plug it in the phone, then open the vxp file. The application refused to run, says can't open this app at the moment. I tried other resolution in the SDK, other SDK version (they have SDK 1.0, 2.0 and 3.0), using different compiler (GCC), and it still doesn't run.

I found there are some vxp store online (most are *.xtgem.com, I don't know why), for example http://shifat100.xtgem.com. I tried downloading some vxp files, put it onto my SD card and run it. Some apps work, while some don't. Some apps work for Nokia 220 but not work on Nokia 225, for example the Advengers VXP works on Nokia 220 but not on Nokia 225 (Nokia 225 has bigger screen, so I think app resolution is the problem) 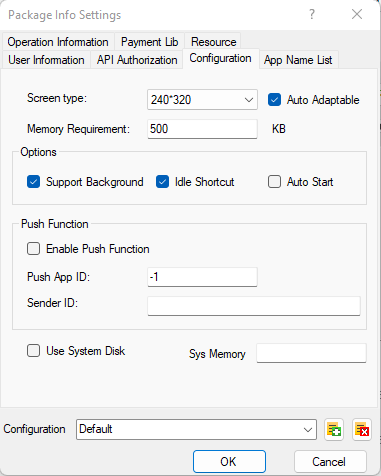 The Opera Mini VXP works on both of my phones.

I noticed that most of the VXP for Nokia are made by Gameloft - a game company.

I tried opening the Asphalt VXP and that Opera Mini VXP on HxD editor and to my surprise, they are in different formats: 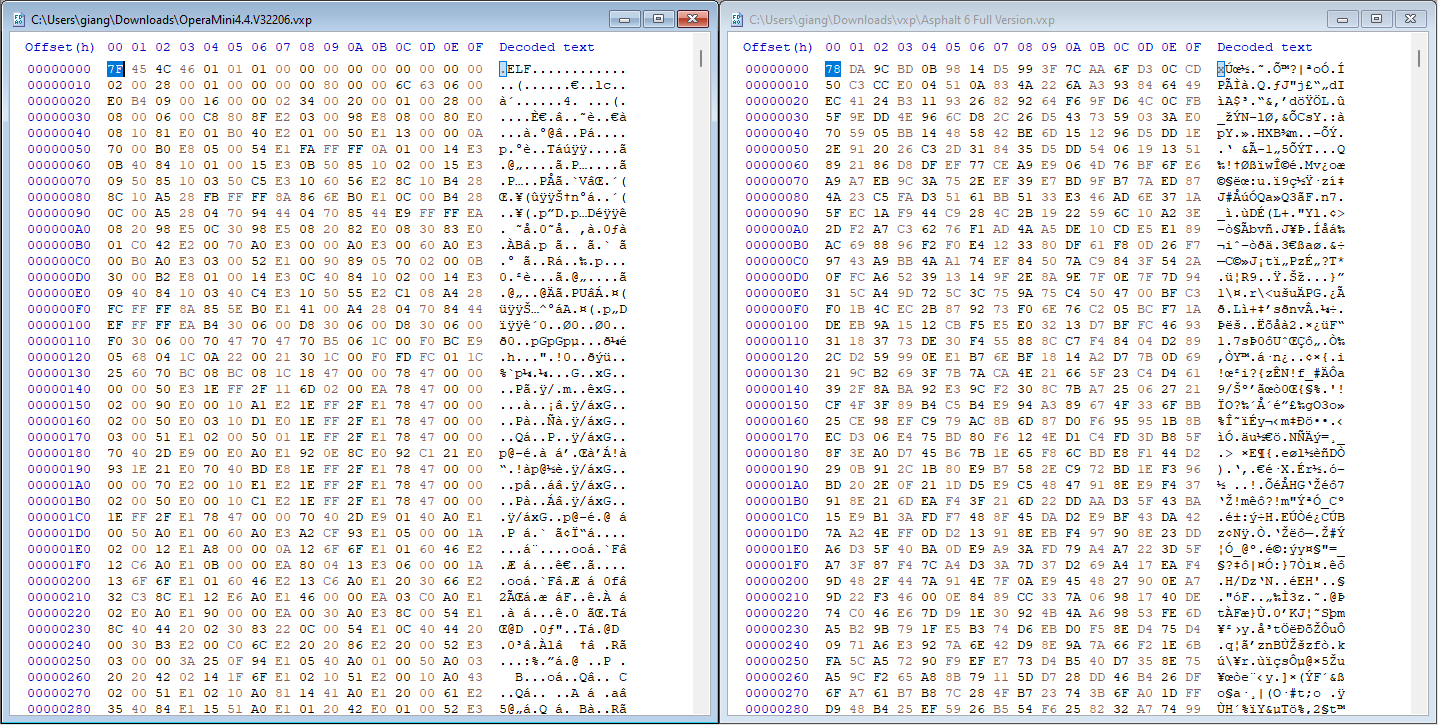 On the left is the Opera Mini VXP, which is in ELF format, on the right is the Asphalt VXP (developed by Gameloft) in unknown format, but the x at the beginning tells me it might be compressed by zlib.

After extracting the files, I got 2 icon files, which seems correct for that game

and 2 files extracted from 2 Zlib compressed data, using file on 2 files output the file type data. Using python -m binwalk -B -A for the first file at offset 0 shows many ARM instructions (which seems to be reasonable since the phone was based on Mediatek ARM chip).

I tried loaded it into IDA, but since I don't know the start address, it's really hard to get where the entry point is.

are some standart MRE API calls while things like

seems to be runtime error messages.

Using strings on the file at 1E194 suggests that this might be a resource file, but note that strings in that file are also existed in the original VXP file without extracting (is binwalk wrong?)

Try loading it into IDA, it seems unreasonable since the main function goes nowhere. I also not sure what is supervisor call

If I patch any path of the file, for example change a character in a resource string (but still remains the same size as the original), it will output can't open this app at the moment.

I have read here that the applications which runs on Nokia S30+ will need to be signed. If that's true, that will explain why patching doesn't work.

Can you figure out informations about the MRE VXP format, how to get it signed, and how to run self developed MRE app on Nokia phones? Thanks!

I am also trying reversing the phone's firmware to find out how vxp file loaded and executed. After doing some Google Search I found some example firmware source code for the MAUI platform (you can think of it like an OS), like this repo, but I cannot find out how it load vxp files.

If anyone is also interested in reversing this firmware, tell me and I will open a new post :)

First I want to say thanks to people at 4pda forum. See their thread here.

Can you figure out informations about the MRE VXP format

how to get it signed

Step 1: Get your SIM 1's IMSI number (NOT IMEI, they are DIFFERENT!)

You can do this in multiple ways, but the easiest way is to plug the SIM 1 in to an Android phone and read. I personally use ADB to read IMSI (worked on Android 6+ without root):

Step 2: Go to https://vxpatch.luxferre.top/ and input the IMSI number you got in step 1. Then select your VXP file, click 'Patch' and you should be able to download a patched version.

You can enter the IMSI number in the project setting, but REMEMBER TO ADD 9 BEFORE THE IMSI NUMBER 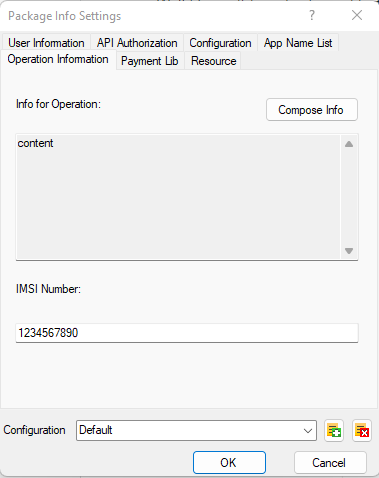 Step 3: Move the patched version into a SD card and plug it in your phone Step 4: Find the vxp file and click open, your app should run now!

Long answer: Some apps doesn't require specify the IMSI, they just work on any devices. That's because they use another way of signing, using RSA key.

If you are interested, read here. The text is in Russian, so use Google Translate if you want to.

I have tested with ADS 1.2 compiler (I cracked myself, if you want it then tell me) and GCC (Smaller size + work very well) and Nokia 225, will continue to test further!

Again, a great thanks to people at 4pda forum!

An image of the app running after signing: 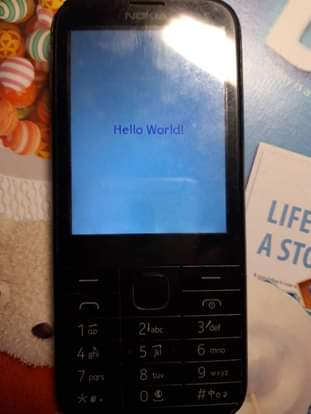 Not the answer you're looking for? Browse other questions tagged arm elf or ask your own question.

5
Reversing Hisense TV Firmware
1
Reverse a BFLT file
1
Basic clarifications about .hex and .bin file
17
Approach to extract useful information from binary file
4
How can the problem posed for disassembly by the mixture of executable code and literal pools in ARM firmware be overcome?
1
Elf file format finding .got and .got.plt segments
0
How does IDA create COMMON, ABS and EXTERN segments of ELF-file?
4
Reverse Engineering Firmware Aether Cone