I want to use the IDA Freeware Version 7.7 for finding the DllMain of a DLL file. The file is from the book Practical Malware Analysis. It is for Lab 05. Name of file is "Lab05-01.dll" and you can download that from here (use VM).

So as Practical Malware Analysis mentioned, when I load the DLL at IDA Freeware, then, the first line of instruction at the graph view should be the start of DllMain.

But when I load the DLL file at the IDA Freeware, the first line of graph view is NOT the DllMain. Because I checked from the solutions and my answer and book's answer were not the same.

What should I do to find the DllMain?

Thank you in advance.

Hmm, so here's the rub. I installed IDA Freeware 7.7 in my Linux VM and tried in parallel in my named license IDA Pro 7.7.

Turns out this seems to be a limitation of IDA Freeware, in all likelihood a conscious one. In particular I can see with the freeware version that DllEntryPoint was not deemed a library function (cyan color), but with the commercial license it was.

It appears that based on autoload.cfg my commercial IDA will load FLIRT signatures vc32rtf (Microsoft VisualC 2-14/net runtime), which the freeware version doesn't do on its own.

If you do that manually through File -> Load file -> FLIRT signature file your DllEntryPoint function should get collapsed and its color should indicate it's a library function (cyan). You can toggle collapsed/expanded mode with Ctrl+Num+ by default.

Now, if you expand the function you will notice it has been recognized as a library function, but so have some of the callees called from this library function. What's more, if you use View -> Open subviews -> Function calls you can see the overview of calls from DllEntryPoint. 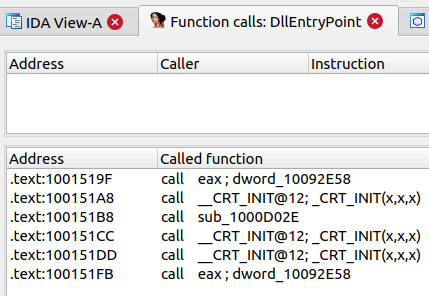 As you can now see, there are only two called "entities" which aren't themselves library functions (call eax ; dword_10092E58 and call sub_1000D02E). And after a cursory look under which conditions the function pointer stored in dword_10092E58 gets called, we can surmise that sub_1000D02E must be our DllMain.

Knowing this, we can now jump to it and manually rename it to DllMain. Once done it should show up as:

Not the answer you're looking for? Browse other questions tagged ida dll or ask your own question.

2
How to figure out which imported function(s) in a virus determine its behaviour?
8
Upgrading IDA Free 5 Database to IDA 7 Freeware
1
identifying function prototype from dll
2
IDA 7.0 (freeware) auto-analysis gets stuck in a loop
2
Anti-disassembler techniques and IDA Pro
1
Does IDA Pro's Freeware version have a command line interface?
1
IDA Freeware 7.0 disassemble ARM .so file
0
How to make a screenshot of a graph view in IDA on Windows?