How to find specific function in IDA pro

Let's say I had a function that looks something like this :

How could I go about the proccess of finding this function in IDA?

As it happens, I recently reverse engineered (and published an analysis of) a program that uses Curl, and I had the IDB open in the background. I decided to see if I could find the function in question. Here's how I did it. 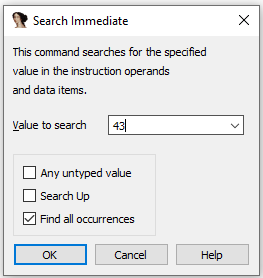 Note that this trick would not have worked very well if the numeric value of CURLE_BAD_FUNCTION_ARGUMENT had been something like 1, 2, 4, 8, 16, 32, etc. I exploited the fact that the number 43 does not appear extremely often in most programs in order to narrow down my search.

Not a stupid question at all. Even the most seasoned reverse engineers run into issues with this task under sub optimal conditions. Like many challenges in this dark art, the solution, or strategies are "reversed" from conventional problem solving. Very poor attempt at humor... This is what happens to you 30 years later when you've been staring at a 8gb idb of anti-* for two sunsets, as a hobby.

So... You're probably thinking: If there were some strings or easily identifiable numbers I could search for them, and get a cross-reference to the code I'm searching for. That would be nice wouldn't it.

In reality the various metadata is often optimized or obfuscated in the targets of your analysis. Much later you'll cry tears of joy when you find a pdb sitting next to a large heavily obfuscated cpp executable.

Old man tip: Massive malware analysis repos, e.g. VirusTotal, allow you to do some interesting searches. You could for example do a search for: The string Release\TargetApp64.pdb, Signer:"TargetVendor", File version:1.2.x. While malware analysis sites specifically do not directly support the uploading of pdb files due to the obvious disclosure risks, they do however maintain the compressed archive where the TargetExe.exe originated, which usually is where the pdb would also be located. ;)

Without strings and easily identifiable constants you have a wide variety of other characteristics you can pursue and that often will be even more effective in locating what it is you seek.

If the routine you are examining incorporates a little mathmatics the compiler will optimize the algorithmic code written by the developer into reduced expressions using specific, optimized constant values and data structures. There are quite a few good papers and tools out there now on this topic. You could go after a few PHD(s) and spend a few years studying them write a plugin that will be not run on the next version of IDA or do what I do: Find a genuine subject matter expert in that field that has already done and use their wares, or bribe them with copious amounts of booze, and/or money and high octane life experiences. Everyone wins. Every reverse engineer needs a bad ass math ninja in their corner, especially one with a little swagger and grit. They do exist, and good luck on that. Seriously, bring me the five most brilliant mathematicians and I'll show you a dinner tab that isn't getting paid because they're arguing for an hour over how much each one should pay. Hire the one that pays the whole bill and slow walks to the bar. For now a nice gentleman has been carrying the torch on the original Sigsrch/signsrch/Signsrch: https://github.com/ajkhoury/IDA_Signsrch-7.0

Machine code and data themselves area a great resource for applying a signature solution. An offset value from a register is can be a characteristic of the size of data structure or the location of a member within that data structure. The larger and more complex the structure or class, the easier it is to identify as the signature can be further enhanced. There are a lot of variations to this but I'm sure you get the idea. For this strategy I'd suggest three things:

C++ is a real pain when you first encounter it and will be for a while down the road. If you want to get of the curve and do something I should've done the first few years into my career. C/C++ ABI: Think of it as a basic set of guidelines that OS and compiler vendors try to adhere to for the benefit of compatibility. The benefit to us is its one of the few sources of insight into how object oriented languages are consumed and laid out in memory. From a brief search I found this.: https://www.oracle.com/technical-resources/articles/it-infrastructure/stable-cplusplus-abi.html

If any other readers have a link to a modern introduction and overview of the primary ABI(s), it would surely be appreciated here as a reference.

While IDA does have support for parsing RTTI structures to annotate c++ classes this plugin's last update took it up a notch and it does a great job analyzing virtual tables like those used by C++ classes.

A few years back I stumbled on this IDA plugin, well written, lightweight and relatively easy to customize if needed:

I'd recommend installing it and debug step through it to get an idea how the author detects c++ classes and builds the relationships of its members to something useful in IDA. Then, if you want to really dig in, take on optimizing the code to detect things and solve problems that the original developer did not. Everybody see's things differently, that's the reason that for over 25 years now, there have been dozens of remote root vulnerabilities found in the exact same hundred lines of Sendmail code, a single routine that countless auditors have reviewed previously.

If you have partial source code that was compiled into your analysis target you can build an executable or library with symbols, then port those over using something like BinDiff. Over several major version those guys have greatly simplified an otherwise very challenging and tedious task. The best part is they decided to release it as a free to download product now.

I'd recommend using whatever tools you have at your disposal to identify the OS version (major/minor), architecture, compiler version, and run time version (e.g. msvcrtX) on your analysis target. Then replicate those as closely as possible in the environment you are building your code with symbols. If the code your are porting symbols for is almost always integrated as a library (e.g. zlib.lib), rather than source, then you're in luck. Libs will be much better targets due to the reduction of compiler steps that may otherwise produce different target code.

There are a lot of run time solutions that will observe data (e.g. class istance pointers) as it flows through code and use those records to dress up code. There are some interesting and heavy computer science/mathematics areas of study that have attracted some real bright folks into further solving this. In all the data flow, taint analysis, tracing, emulation, and other run time methods I've deployed over the years, I find myself doing it statically by hand now. A little code here and there to automate redundant tasks of course. If the code can be executed without requiring a secret, everything needed to execute it is in there somewhere, or somewhere close by. I'm very likely a masochist when it comes to reverse engineering but I think you have to be if you enjoy spending your life living inside a "black box". If anyone ever gives you grief over a what you feel, is a simple question, they are either very young, or very talent less and will never truly shine. The most awe-striking, brilliant people I've had the pleasure to work with were always wide-eyed and exponentially humble. They'd drop everything, miss a critical deadline just to transfer knowledge, learn something themselves, share the experience and tackle an old demon once again. If it wasn't for them this reply wouldn't have been remotely possible.

8
BYTE3, does it mean the third or fourth byte of an int? IDB file that's already supplied
10
Dll injection and GetProcAddress with the winapi
4
Where the pointer to virtual function table is located?
4
How to match disassembled instructions back to C/C++ source?
4
compiled binary - what do disassembled instructions correspond to in C/C++ source (Linux GCC)
1
Return by Value/Call by Value internals
4
Understand/Reverse simple (but good quality) TTS engine
0
Modifying program using IDA/Hexrays decompilation pseudocode