IDA: String referenced in Assembly, but not shown in string view

I was looking for a spcific string in IDA, but there were no hits in the "string view". Now after browsing the disassembly for a while I realize that not only does the string exist, IDA did in fact find this string. It was referenced by assembly code, IDA prints it as a comment next to the assembly, even the location of the string is named with the first characters of the string!

Very annoying! How come it is not listed in the string view, then? How would I go about finding referenced text strings by string?

Right-click in the strings window, choose "Setup", and ensure that, under "Allowed string types", "Unicode C-style (16 bits)" is enabled: 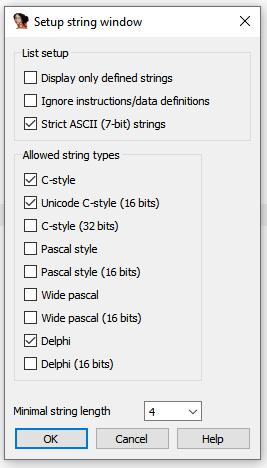 4
How can I make IDA see a string reference?
1
Specific byte purpose in header of little endian ARM binary
4
Can't find "referenced string" in OllyDBG
2
How do I find where a String is referenced in IDA Pro?
2
Why can I see certain strings when PE is opened with a hex editor or a simple static analysis tool but not with IDA?
0
IDA Pro not undefining assembly?
0
How to view registers values in string
1
Find DllMain using IDA Freeware