How to import macro as enum into IDA Pro?

Is there any tools can auto generate enum type by macro?

For example, NTSTATUS in Windows defined as

I want to import it into IDA Pro as enum, How can I do it?

IDA may already have what you need. Otherwise parsing the WDK headers would be the way to go. I did this a very long time ago, but could not dig up the IDC files. Depending on the sample you look at, something like DriverBuddy may also come in handy.

Consider the following snippet from ntdll.dll:

Clearly 0C0000022h and 0C0000043h are NTSTATUS values. You can use the "Use standard symbolic constant" menu item from the context menu (right click on any such value):

... and ideally you will already be presented with one or several usable choices:

... scrolling to the right within the dialog will also show which type lib introduced the constant(s):

If nothing pops up it's usually a good idea to add them yourself via File + Load file + FLIRT signature file, which should make the appropriate enums and structs available in your database:

The shown library modules would be the most appropriate for your purpose, it seems. However, if you wanted to outright add the complete enum (technically you will receive a copy of what in IDA lingo is a "standard enum"), you could do that from the enum subview (by default: Shift+F10). The subview, will be headed by a helpful reminder of the keyboard shortcuts:

And so after hitting Ins you should see the following dialog: 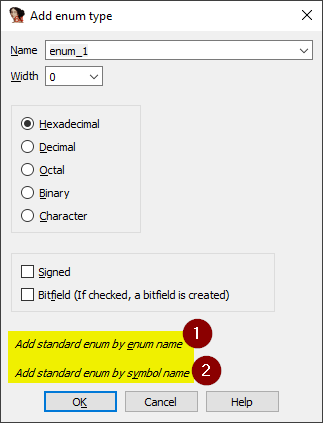 Since you have symbol names, pick option (2), if you knew the enum name you could also use (1).

From the opening dialog we could search for STATUS_ACCESS_DENIED by typing it while the dialog is open. The search term will be helpfully shown below the list (highlighted). Once you found the constant/symbol name you were looking for, simply double click it or select it and press the OK button.

The result should show as a collapsed enum in the enum subview:

So there you have it, had you known the name MACRO_STATUS up front, you could have added the enum by its own name instead of the name of a contained symbol.

The resulting copy of the enum can now be freely amended by you.

And if you're wondering about the odd leading 0XFFFFFFFF that's because the underlying type of NTSTATUS is LONG and therefore 32-bit signed. I was using a 64-bit IDB for this. If you use a 32-bit one you can simply get rid of the leading FFFFFFFF (but not the 0X).

After you have the enum added, you should be presented with a submenu from "Use standard symbolic constant" and inside of it you should see the appropriate symbol, which after selecting it will give us:

suppose you have are analyzing a binary whose source is

use ctrl+f9 and parse it you will get compiled successfully

6
Why IDA Pro generated a "j_printf" function call?
2
Why IDA Pro generate define-lack code like this?
4
How to make stack variables into an array in IDA Pro
0
Import hexdump into IDA pro
4
How to import Windows DDK headers into IDA?
2
How to help IDA to auto complete libc functions?
0
Find out the name of constants and var in IDA pro