In the part 07 of lena151 RE tutorial, we arrive to these instructions: 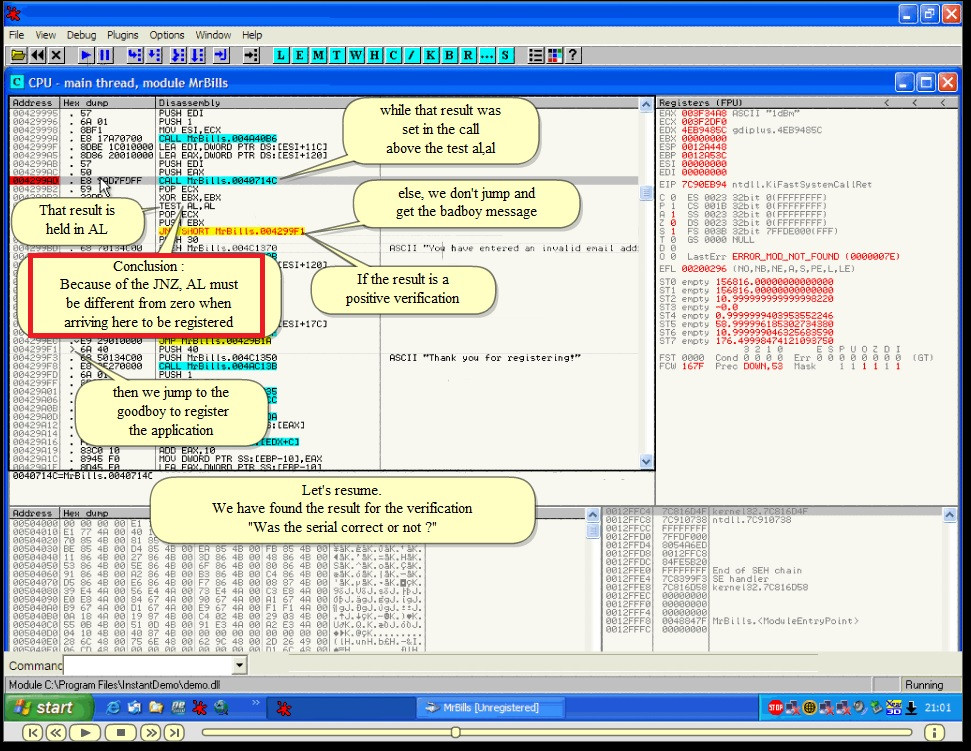 Because of the JNZ, AL must be different from zero when arriving here to be registered.

My question is: Why the AL must be different from zero? If 2 value (0=0) are equal, the Z flag set to 1, because the result of comparison is true! Is this right?

Why the zero flag must be different from zero?

It is a little confusing, but the Zero Flag is set (i.e. its value is 1), if the last result IS zero:

It's better to think only in terms of results, ignoring Zero Flag - flags are mainly technical tools for machines, not for us humans.

The test for zero can be performed with the same effect using either TEST, AND or OR, where both operands are the same register. You will find all three variants in real-world code to test whether a register is zero.

Let's go into the important instructions in the reversed order.

You have some natural possibilities to reach your desired behavior (jumping over the "bad boy"), but at first I remind the original order of instructions:

Not the answer you're looking for? Browse other questions tagged assembly register or ask your own question.

0
Semantics of the RRX shift instruction in ARM and Carry flag updates?
1
Reuse symbols in disassembling/reassembling a C++ program
1
What is the difference between these two function prologue instruction sequences?
1
Assembly - Binary Bomb Confusion
4
ASM working as is, but not in a C program
3
How do I approach this CTF Debugging Program?
2
Finding the correct input of an executable to print out the flag. IDA 7
0
Problem with set of instructions in dissasembly
0
How JNE work in Ollydbg?
1
Help understanding ARM Cortex-M4 SBC instruction