Are those code snippets and file paths in a C++ binary some sort of standard debug information?

This C++ binary has code snippets and paths to sourcecode files everywhere, which is probably some sort of debug info. 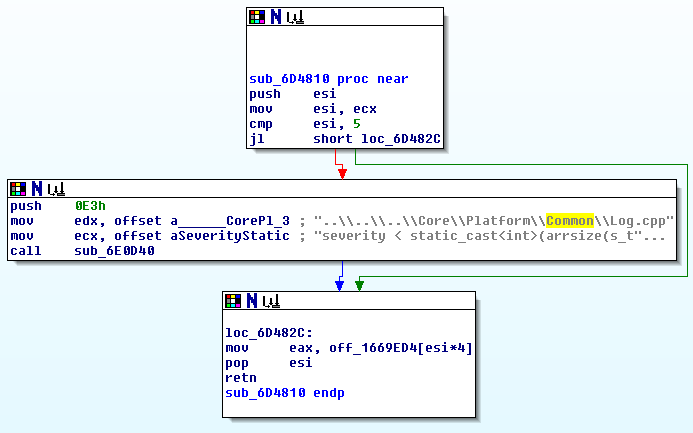 It has the fingerprint of an assert:

assert is a standard function in most (if not outright all!) standard libraries, and so if your decompiler could recognize which compiler was used, it would have assigned a standard label to sub_6E0D40. Since it didn't, you could trace that address and see if (a) it jumps immediately to an external routine such as Windows' native Assert, or (b) does what an assert does: outputting the error and immediately exiting.

Addition: using the stack plus registers ecx and edx seem to indicate this sub is declared "Microsoft __fastcall" (wikipedia).

Not the answer you're looking for? Browse other questions tagged ida c++ debugging-symbols or ask your own question.

2
What are the .cpp files in IDA disassembly
1
What location is this and what does it signify - "d:\w7rtm\minkernel\ntdll\ldrinit.c"

5
How to find event functions called by UI components in a C++/DirectX program
3
Insert logging into existing binary code, ARM
2
Need to recover C++ code from binary of server and client
2
How to analyse a poorly documented DLL API?
0
Extract decrypted Assembly-CSharp.dll from APK via IDA