My colleagues and I have taken on a HackRF project for university, using HackRF One. One of the targets is garage door controllers.

We own two controllers with DIP switches for the same door, one has 10 switches while the other one has 12.

Using hackrf and Universal Radio Hacker we were able to obtain signals from both controllers (top is 10 switches, bottom is 12):

We were able to notice that the long parts of the signal correspond to 0s and the short bursts (probably including some of the 'silence' after them in order to be the same length) are 1s. At this point I am expecting the signal to be like this:

Our efforts to replay the signal for the garage door have been futile, even directly in front of it. We tried to import the data in Audacity and normalize the signal in order to get the most power out of it but Universal Radio Hacker does not import it properly from a RAW 8-bit unsigned PCM 48KHz format (this is the expected format right?).

Despite not succeeding in the replay attack with the captured signal from URH without using audacity, the following questions arose:

Are we missing something even more important here?

Edit: the door is not rolling code since we are capturing the same signal on every press (and it's a 30 years old door)

Edit (2): The signal with autodetect parameters is the following: 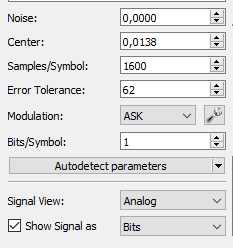 But I believe 2000 samples/Symbol is better since it yields:

The problem is, URH replays samples not bits, so why does the replay not work?

Edit (3): I read that the antennas that come with HackRF are not useful for transmitting in that frequency (27.015Mhz), is this true?

Edit (4): After fiddling around with the URH filters I got some good parameters for the capture of a long press I had named "repeat". The same information is repetitively transmitted for the duration of the press.

which resulted in getting from this: 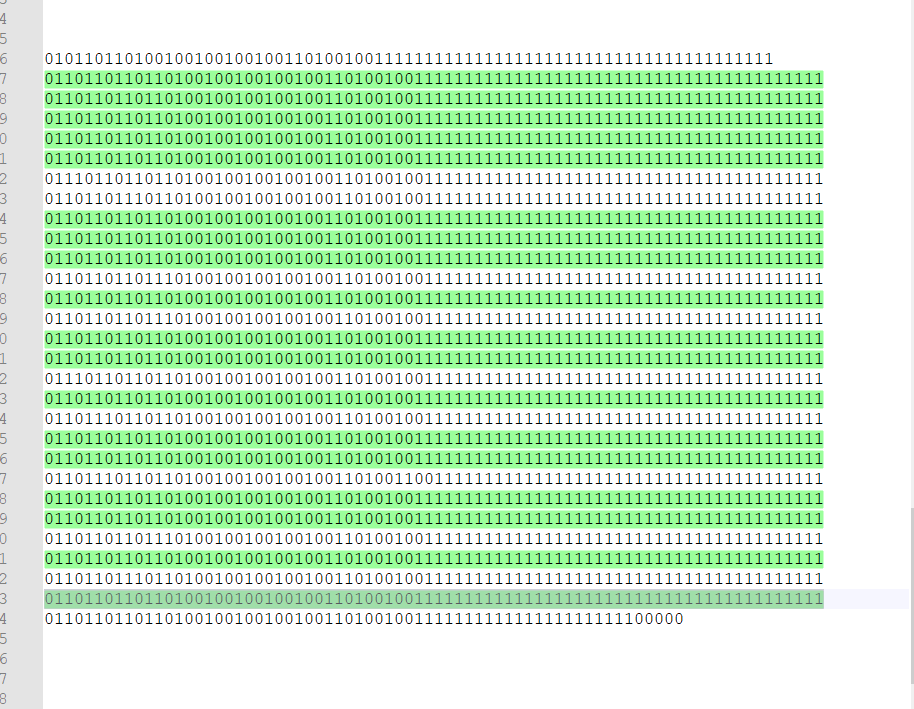 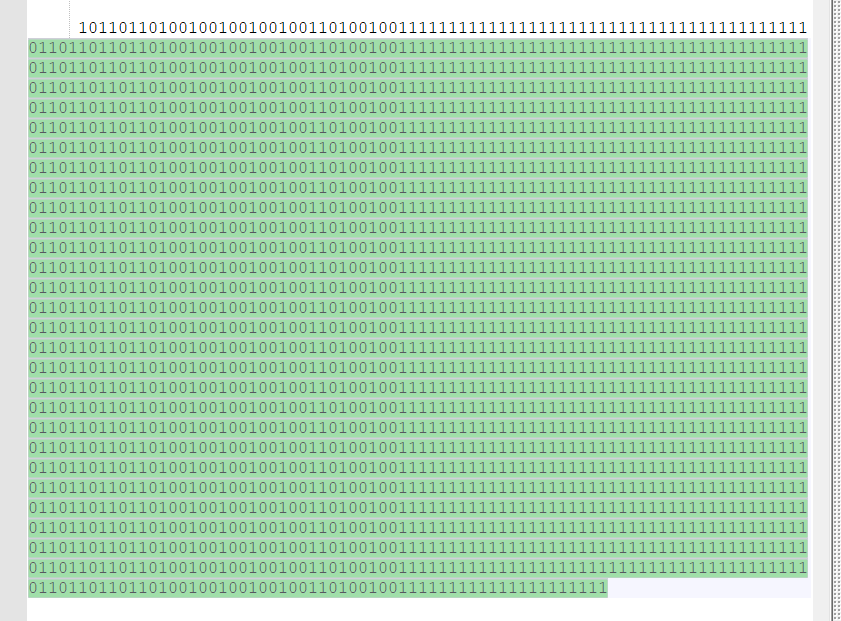 I have not yet tested the attack. Does the way the signal gets decoded into bits change the way it gets repeated? do the parameters affect repetition too? what about the filters? 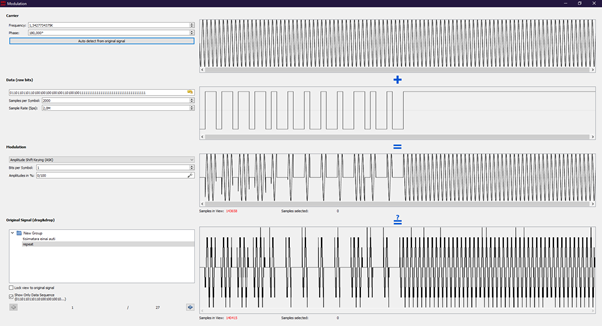 Will test tomorrow and update accordingly! 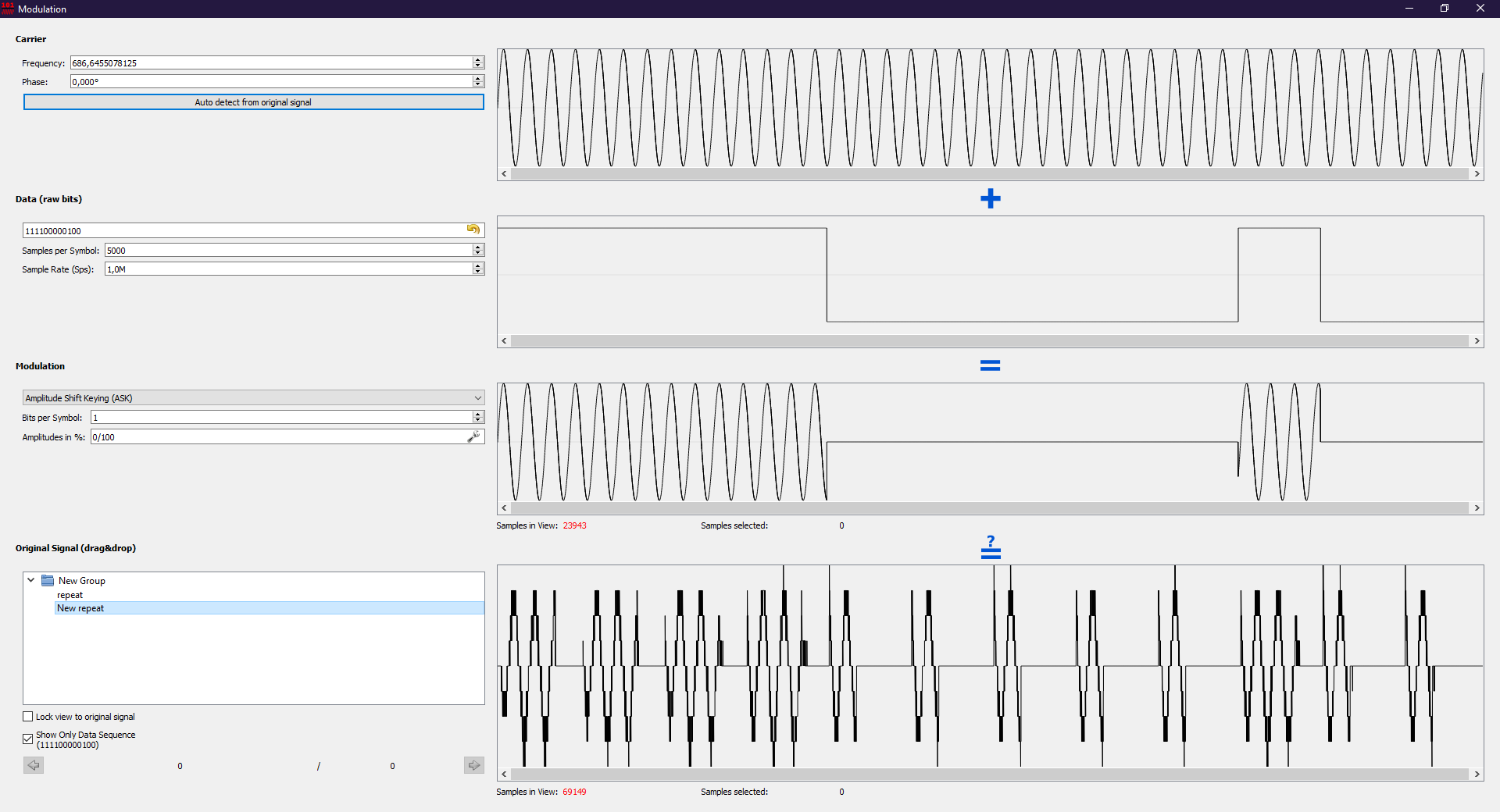 Edit (6): Setting the sample rate to 4M and bandwidth to 2M during recording yielded the following:

Autodetect seems to have gotten the right values, samples per symbol was manually set to 4000 since that is the approximate width of a symbol:

Simply replaying the signal didn't work, but generating a new signal from the Generator tab with autodetect parameters DID ! 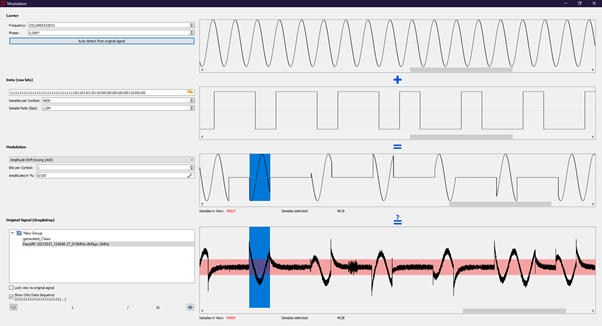 I believe both keyfobs send the same data which is

DIP encoding to signal would be byte by byte with swapped nibbles.

Try to use Autodetect parameters in URH.

Not the answer you're looking for? Browse other questions tagged hardware protocol or ask your own question.