A question about moving data with LEA and MOV 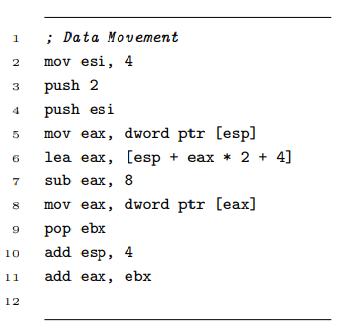 Given the above code, i am struggling to understand what happens in line 5 and 6

As i understand it, in line 5 the Adress of the ESP is loaded into the EAX register. While there may be the value 4 stored at ESP at that point, the adress is not known. So given this uncertainty, how can we know in line 6 what the value of EAX is, if we do not know the adress of ESP in Line 5?

In this snippet, that would be the value 4 because it was pushed to the stack last.

Commenting the lines from 6 onward:

So the code is just juggling the two pushed numbers around and adds them eventually in eax.

8
What is the difference between MOV and LEA in example?

10
What to do when IDA cannot provide a function name?
1
Who does construct the stack on process creation in Windows?
7
IL for decompiler to human-readable format
2
How does scanf interact with my code in assembly
6
Question about LEA instruction
1
how data types and variables are converted to machine code?
8
Why use MOV R0, R3 and then MOV R3, R0 (thus back and forth)
1
Mul(Multiplication) in x64 and in x32 assembly