I'm currently trying to reverse engineer the decryption algorithm for an old online game, using a chat message packet, as it contains text which is easily recognizable.

I used a packet sniffer to get the received packet (which is encrypted) from the server:

The first 4 bytes are known and unencrypted:

Knowing the encrypted packet, I used Cheat Engine to set a breakpoint right after the winsocket receive function and then search the buffer where the packet is stored.

Important to note: Apparently, the buffer which stores the received (encrypted) packet will also store the decrypted one.

Checking what writes to this address results in exact one instruction.

As the buffer which contains the encrypted packet also contains the decrypted one, I can say for sure that this has to be the function which decrypts the value.

The decrypted packet looks the following (last bits contain the chat message, somewhere in between the username is stored):

I then used Ghidra to inspect the specific instructions which handle the decryption part - this is where I am currently stuck and don't know how to proceed, as I don't have a deep understanding of this topic.

(Note for the type == 0: When the game first released, it only used a simple XOR with 255 as an encryption, this was apparently later discontinued)

From my understanding, the code does the following (assuming, param_2 is the buffer for the packet?): 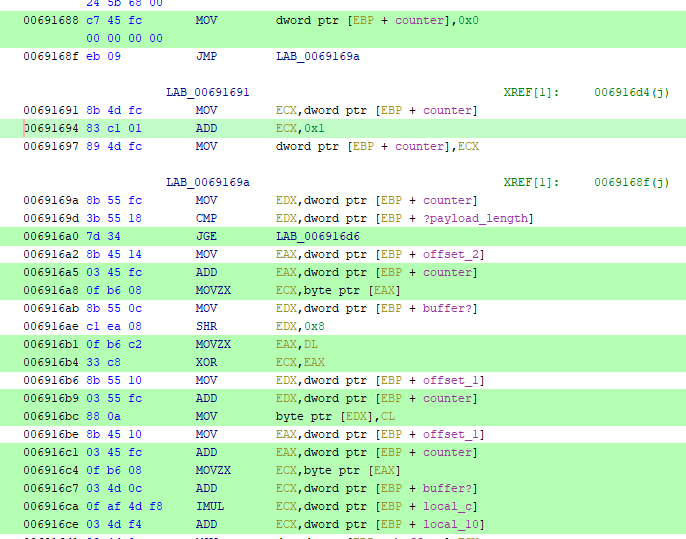 As said in the beginning, I am not experienced when it comes to this kind of things.

I therefore would like some additional information on how I would continue from here on, so that I could implement the decryption in my programming language of choice - what exactly is the code block above doing?

I hope I included all information needed.

Thanks for reading (and helping)! :)

From type == 0 you see that it writes to param_3 and reads from param_4. So those parameters must be pointers to output and input buffers respectively. In fact, if you change them to correct type (byte *), then I believe Ghidra should be able to simplify the rest of the code to easily understandable form.

The part that modifies param_2 is a simple pseudo-RNG. Note the classic trick of getting rid of the not-very-random lower bits of its output by shifting right.

Also, I didn't check this myself, but I bet types 1 and 2 do the opposite of each other. That is, one of them encrypts and the other decrypts.

7
Virus uses a custom XOR encryption and need help possibly cracking it / Reversing EXE
9
Guessing CRC checksum algorithm
3
Identify a decryption scheme
2
XOR Encryption (XPost from Crypto)
2
Help me understand how to actually break an XOR/Vigenère cipher
1
How is the IV generated from a timestamp based on this function?
5
Stuck on XOR decryption of firmware
3
Decoding algorithm with checksum