A PE packer: issues with the packed image base address

I am toying with writing a basic PE packer, whose job is simply to execute the attached target PE in memory. I have spent a couple of days getting intimate with the format, and I think that I have grasped it well enough for the purpose. These are the methods I use:

The loader, of course, has an exotic image base, as to not conflict with the standard 0x00400000 base. My problems lies somewhere along there. Almost every .exe has its relocations table stripped, so there's no way to do a base relocation if the desired base address is unavailable. The loader having a non-standard image base solves the problem to an extent. The target's desired base is only available in about 50% of runs. I've tried to find out what might occupy the memory in the other 50%, and have found out that it's almost always a section view. Of what, or whose, I don't know. I've tried to use both NtUnmapViewOfSection and NtFreeVirtualMemory, but they don't solve the problem. The first seems to introduce memory corruption and the second does nothing. Is there any way of claiming that memory? Here's a screenshot from ProcessHacker: 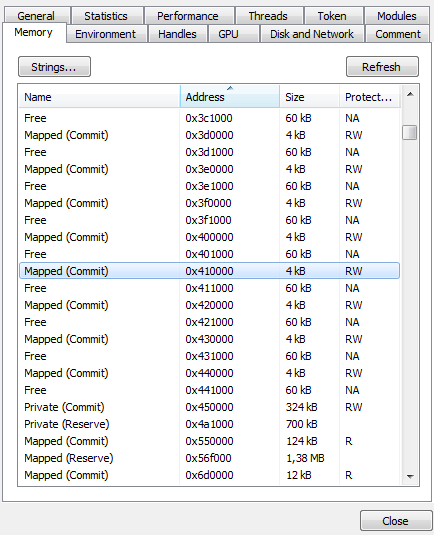 All ideas are welcome.

I haven't dug deep about resource loading yet. But if the new PE image uses LoadResource, it might read the loader's instead. Not sure about this.

You can get more ideas from debugging a UPX packed sample.

Not the answer you're looking for? Browse other questions tagged pe packers or ask your own question.

7
Recovering original PE sections after Themida merges them
1
How to deal with code that change its address among different execution
2
PE file format: How can I find the heap memory space in a running WinNT program?
2
Adding a new PE section for a code cave
1
Injecting exe file into process fails on windows 7 but works on windows 10 / Execution library function fails, access denied
11
Is there any way to get my own image base without calling any WinAPI functions, such as GetModuleHandle?
0
Is relocation table only used for absolute addresses?
0
How to calculate the size of a PE from headers?