I've dug into files of a game that was made in Unity (which uses C# language)... and i was interested in extracting 3D models and textures etc. I understand that data and obb are separate, BUT! In my case, both of these have the same contents. Half textures are in data and half in obb.. i've been able to extract from data, but i came to a stop when i looked inside obb.

What i saw was a file named res.bytes, and i've been looking for ways to open/extract from a byte format but in the end it led me to scripting. Yes i've tried reverse engineering tools and other simple methods such as renaming it to .zip... no luck.

If there's anyone who knows how to open this byte file with a script i'd appreciate it.

This file seems to have some kind of header followed by an array of UnityFS files.

Although I won't be writing a script for you, it should not be too difficult to write one that can at least extract all the UnityFS files contained by it.

I believe there are tools that can read UnityFS files, but I didn't test any of them.

Here's what I found out about this file: 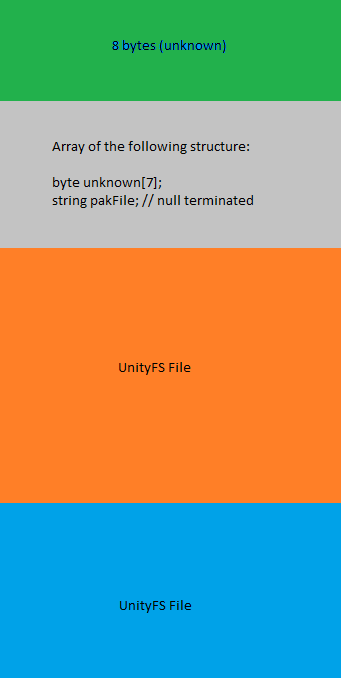 Once you found the first UnityFS file, you can figure out where the next one is by reading it's header and getting it's size. Note that the values in the header are all big-endian.

Not the answer you're looking for? Browse other questions tagged file-format unpacking decompress c# or ask your own question.