How to find encrypted strings in an executable?

I am trying to reverse engineer an executable.

I am using Process explorer to dump all strings present in the exe image, and from the process's RAM when it is running. 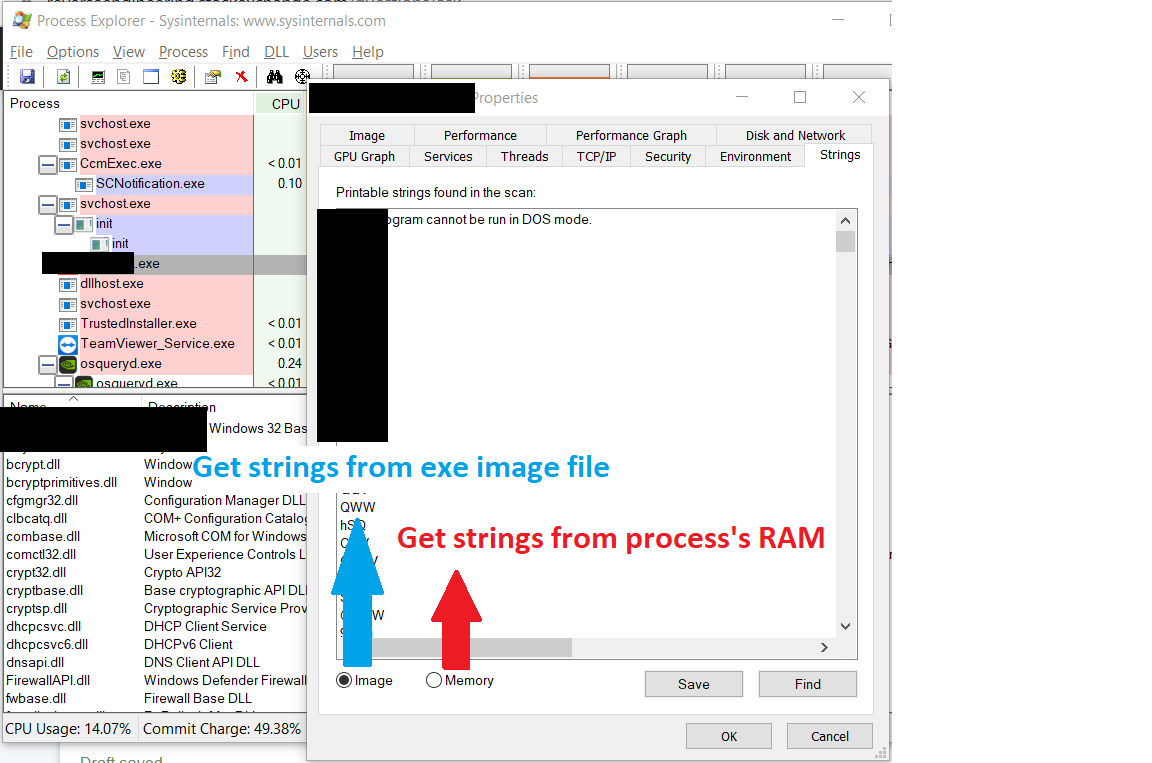 The two dumps return a different number of strings, with the latter (from RAM) returning a much greater number of them. This discrepancy could mean one of the following.

I used various tools to rule out 1, and 2. These tools check file entropy and do other statistical checks to figure this out.

Some of the tools I used:

To rule out 4 I used process explorer to check each open file handle and loaded DLL. Found nothing suspicious.

For 3, I proceeded as follows.

I attached process to WinDbg, and tried to search for a string from RAM string dump obtained from process explorer.
eg. searching for string "--control".

This string was present at location 014ebbf5. To figure out what kind of memory this address is present in, I used WinDbg's !address command.

Here is the output I got.

I was expecting this to be an address from stack or from heap, but it is instead from the process's READ ONLY area where memory-mapped file of the executable is present. A read only area cannot store decoded string since you would have to read encoded strings, decode it, and then write them somewhere.

During my analysis I use Floss!, it is an excellent tool and super simple to use, on several occasions I can find the strings I am looking for, you used PEID to check for packers please use a more up-to-date tool like DIE (Detect it Easy), if it is an .EXE file consider analyzing with a professional and updated debbuger like x96DBG(x64dbg/x32dbg), I believe you get better results that way.

6
Retrieving encryption/encoding logic from dll
13
How can I find the source of a string in an old DOS game?
1
How to find compressed or encrypted parts in a packed executable?
3
How to find address of more complicated, unknown data structures
1
Not able to find Hard coded strings in the mac executable file
4
Statically recovering thunks in Windows x86_64 DLL
1
Reverse engineer sticky notes to allow external script to open new notes