Specifying the register value which is constant for all the functions

In the firmwares I met the situation when some register value is set at startup, and then it's implicitly used as a base address to access the variables.

e.g. register r13 is set to 0x40000000 which is address of RAM. And then all over the code the variables are being accessed as offset to r13. Hex Rays doesn't like it at all, and generates lots of red variables for which VALUE MAY BE UNDEFINED

Is there any way to set the register value, so that Hex Rays uses it in every function?

EDIT: Actually IDA does it in some cases. PowerPC processor module seems to know about __init_registers() function when working with ELF files and uses r13 value to calculate the global variables offsets relative to r13.

And I've learned that it actually creates User defined offsets in such cases. 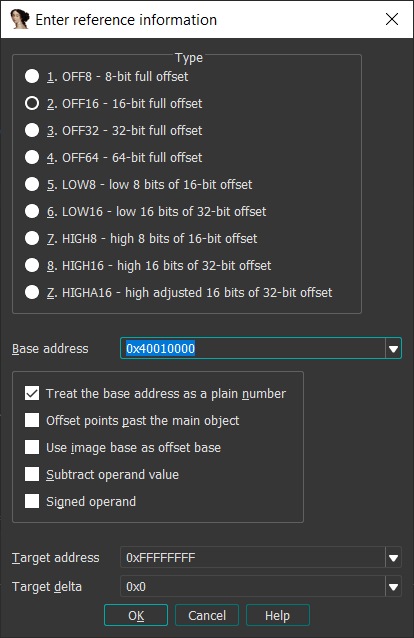 But still don't know how it's implemented to know r13 value.

I don't know off the top of my head if there's an option you can set for that, but that's the type of thing that's utterly trivial to write a Hex-Rays plugin for. I bet that would be less than 25 lines of code. If you can send a link to a binary, I'll write a script to demonstrate. Assuming you're writing IDAPython (the details would only be slightly different in C++), the outline would be:

After writing the answer above, I had some further thoughts on the matter.

Red/orange variables and warnings about values being undefined is not what I would expect in this situation. Rather, I would expect that you would see a bunch of __usercall prototypes that had r13 as an argument, and then you would see nasty pointer arithmetic typical of code that needs a structure definition, as in *(QWORD *)((QWORD)x + 20). So I guess an alternative answer would be that you could add those arguments to the function prototypes, declare one big structure for the data section in question, and define the r13 __usercall arguments as being pointers to that structure.

4
How can I get xrefs to class member variables in IDA?

7
How to map a variable to multiple names in Hex-Rays decompiler
2
IDA Pro and recognized library functions
1
Set register to specific value for use in autoanalysis in IDA Pro 6.9
2
What values do I use for Freescale ARM imx233 μP in IDA Pro “memory layout dialog” for RAM and ROM?
2
Reverse engineer a checksum algorithm from application
1
Hex Rays Mapping To Wrong Variable
1
increment a register which has maximal value?
1
How to stop Hex Rays optimizations?
1
IDA pro and compiler-optimized 1-based array accesses in structure