for example based on experience, the last byte of API/library call instructions is always 0x0A (let me know if I'm wrong), but why? what are the structure of the 4 bytes of call operands? what about operands of ldstr instructions?

because they are different from native apps, they are not raw offsets, they seem to be offsets into a table but i cannot find any post that explains this in detail?

the best thing i found is this :

but it still doesn't explain many things

the last byte of API/library call instructions is always 0x0A

It's because calls needs to have method (ref) as a parameter and methods are defined in the table that has an id of 0x0A.

When CIL code uses metadata it does so through a metadata token. This is a 32-bit value where the top 8 bits identify the appropriate metadata table, and the remaining 24 bits give the index of the metadata in the table.

So the first value is the table id - and as I've mentioned the id of member's ref table is value 0x0A. And the rest is an index in the table (in our case 0x6).

More about the tables? Those are basically part of .NET metadata information, that can be seen when you open one in i.e. dnSpy 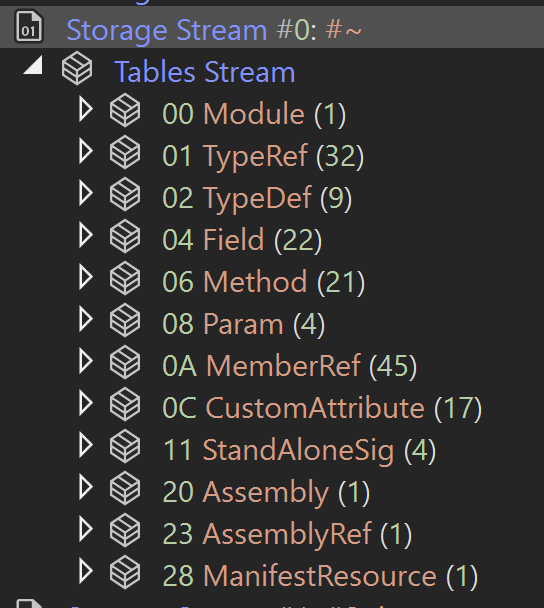 what about operands of ldstr instructions?

In this instance, the instruction has the following structure 72XXXX0070 and 0x70 indicates different stream - namely User defined strings or #US. The rest (again interpreted as a little-ending 32-bit val) is the offset (in bytes) in #US table.

Generally dnSpy is a great tool to verifying those values as one can metadata tables.

The linked article (and the whole series is a great resource) it does explain (I think) the structure but maybe indirectly - just find the information about metadata token.

We can induce from it the whole structure of a metadata token.

Not the answer you're looking for? Browse other questions tagged ida windows malware .net or ask your own question.

6
Segments in IDA. How to overcome NONAME problem
13
How do the internals of a Windows update security patch work?
2
Tracing variable access/usage instructions
4
IDAPython Strings constantly returns NoneType with str()
3
How to find address of more complicated, unknown data structures
1
How to know where a sequences of bytes are used in a .NET application with Dnspy?
1
Where are the .NET IL bytes stored in an .NET executable?
1
Reverse engineer sticky notes to allow external script to open new notes