What image format is this?

I am trying to reverse engineer an image file generated by my microscope. It is supposed to be an HDR image. The file has very distinct pattern in HEX editor but I am unable to recognise it: 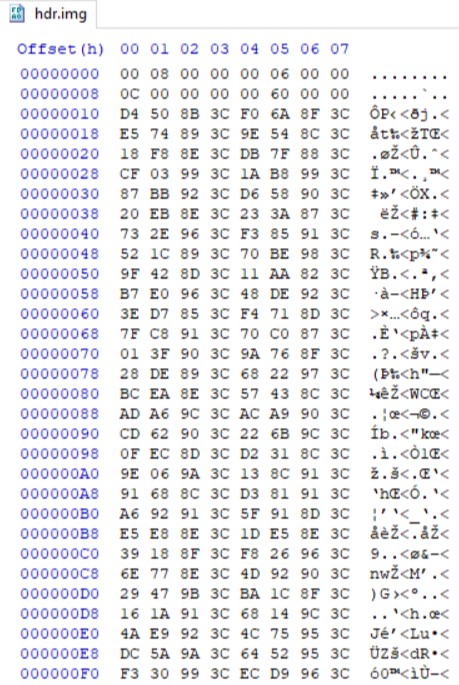 First 16 bytes are some sort of a header and then every 4th byte is 0x3C, and sometimes it is 0x3D instead. The file continues with the same pattern until the end and ends with 0x3C as well. Is this something very proprietary or do any of you guys recognise it?

Without more information, as suggesting by the various comments, it's hard to be completely sure but, based on the information available, the format seems to be a very simple uncompressed vendor-specific 'raw' format with no specific identification or 'magic' numbers or tagged structure.

What follows is my best guess as to the format. Having a full file and a picture of the image it is thought to contain would confirm specific details either way.

The header appears to have the following format -

The suggested size of 2048x1536 does appear consistent with specifications from several digitail/usb microscopes that are available online.

The pixel data then follows for each row, with each pixel appearing to be stored as 3x 32-bit IEEE floating-point value (i.e. B = 12 bytes.) These three values being, presumably, R, G & B components in some order.

Subsequent rows will appear T bytes beyond the previous row.

If correct, this would suggest your original file is relatively large at around 36MB.