Lacks features: i would like to start the timer only after the device reach the target temperature: with meats, it is ok to add food to the water as it heats. Not for Poached eggs!

Qemu emulation with unicorn framework: i traced mcr instructions. it seems the firmware is configuring the MPU this way: 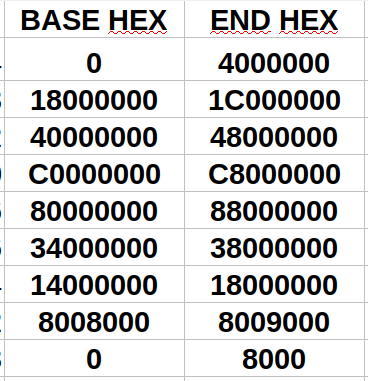 Recon Then i was able to id "Boot_console_put(char *)" function and a memory address where the firmware write char by char all the boot message related strings: 0x3402f404

Console Output Then the emulated firmware update payload seems to be stuck on a loop when trying to acces and I2C slave (could be the eeprom) printing this:

The question : i would like to guess What are all the others address the firmware is referencing in the code. Searching google and github for similar constant/base address & offsets didn't help... google search result returning off topic commercial links.

2
Can't extract machine code from Cortex-M3 firmware
0
How to split ARM code/data from binary in Inmarsat Isatphone Pro?
1
How to determine ARM architecture from the ELF file extracted from the firmware?
2
Disassembling ARM based Camera Firmware
2
Code caves in arm assembly