Is there an equivalent of 'Run trace' as in OllyDbg for IDA PRO?

I have been looking for the equivalent of the "Run Trace" option of OllyDbg in IDA Pro. Can anyone mention if there is one and how to use it ?

A trace in IDA Pro could by replayed by using Trace replayer. It is located within Debuggers submenu. You could switch to Trace-replayer by going to Debugger->Switch Debugger...->Trace replayer 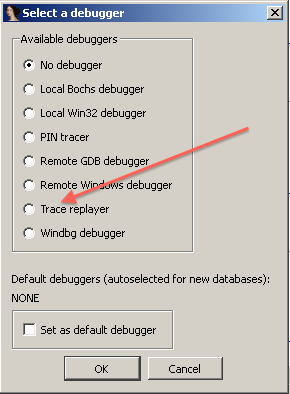 One thing to remember that you have to have trace created before you can replay it. In order to create a trace you will need to do the following:

Not the answer you're looking for? Browse other questions tagged ida ollydbg idapro-plugins or ask your own question.

6
Is there any tool which parses ollydbg run trace?
7
Parsing IDA Pro .asm files
2
OllyDbg 2.01 Run Trace "Skip selection option"
1
Making plugins for Ollydbg 2
11
Best alternatives to IDA Pro, Immunity and OllyDbg for a blind user
0
Run to user code in IDA
2
Batch mode of ida pro 6.5
0
Getting Xrefs to Windows Library Functions in IDA Pro
1
Is there a way to attach x86dbg with ida pro?