Replace string in hexa with a longer one in .bin without destroying the structure (in .data)

I would like to replace some hard-coded strings in a compiled exe (in .data) which is in chinese (with no possibility to put it in other languages). I managed to replace strings in hexadecimal with other ones of same lenght, but I face some issues of course when I want to replace strings with longer ones...First option - overwrite - will overwrite next bytes, and second option - insertion - will mess up my .exe probably because of his structure and so one.

What possibilities do I have ?

Already tried radar2;ResEdit; ResTuner which founds most of strings (string tables) but not the ones which needs interaction in the exe. For example if I click on a button a dialog appears, which is not found by those tools. That's why no I'm in need to replace those strings directly with an hexadecimal editor.

After some reasearch it seems that those softwares found string in .rsrc but not in .data

Now I succeed. It seems that there is some kind of check of string length or something like this but not on all strings...

Here is a replaced string with his correct size:

Here another with length issues:

and it's local function:

Here what I replaced :

It seems that ther is probably a check of string length somewhere...where do I need to give an eye ? Thanks!

EDIT2 Here sub_41A974 (I tried to understand what this fct is doing but I still don't understand: 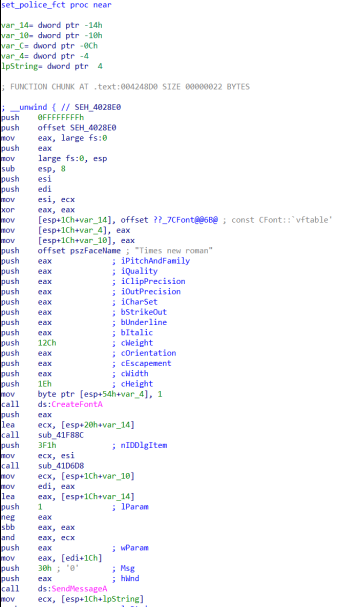 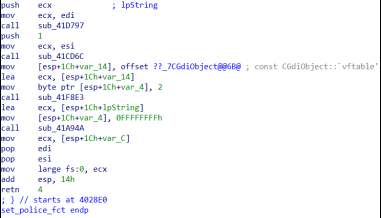 Seems that doesn't have to deal with any of this. Directly after started the software, my data is trunked (Windbg comfirmed it I only started and exit the software) :

The resource editors (like ResTuner) find strings in resources, generally in the .rsrc section. This section is very easy to edit because it contains a tree of pointer/size to data. If you want to edit a string and you do not have enough space for the longer string - you can move it to some other address and fix the pointer and size.

If you can find the strings, but they are in .data (or some other section) then they are referenced in code by their offset. If you are lucky, the offsets are hardcoded in the program (i.e. you can see xrefs in RE tools), you can modify them. In this case, write your longer string where you have enough space, like at the end of the section and modify the hard-coded offset to point to the new area.

Resizing and moving sections around the binary files is also possible, in case you don't have enough space at the section end.

If the offsets to your strings are not hardcoded (i.e. they have no xrefs in RE tools) then they are dynamic and you will have to dig deeper in the code to find where they are referenced.

Not the answer you're looking for? Browse other questions tagged binary-analysis radare2 executable strings or ask your own question.