Ghidra is renaming EAX as param_1. Why is this happening? I find it very confusing since it is clearly not a parameter and different uses of EAX are named as if they held the same value. 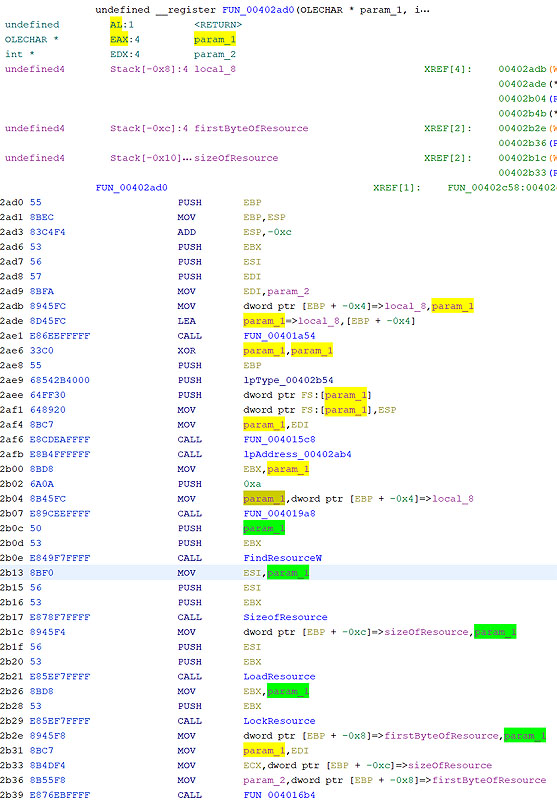 This is a feature that can be deactivated by unticking the option Markup Register Variable Reference found in the Edit -> Tool Options window in the pane Options -> Listing Fields -> Operands Field.

I would personally not turn this off, because I suspect the proper way to resolve this is to get Ghidra to recognize the local variables the eax usages present, which will then be renamed accordingly. This should only require some minor cleanup of the decompiled code, possibly even just by using Commit Local Names, which is found in the context menu of the decompiler window.

Ghidra renamed EAX as param_1 because it is a parameter for the current function. This calling convention is similar to fastcall, although not quite the same. Selecting how to pass arguments to functions is up to the compiler, so long as the code belong to the same program.

At the beginning of your code, param_1 (EAX) contains a pointer to a OLECHAR object. Later, it is saved to local_8.

Because EAX is used as parameter for many other functions inside your code, it may be correct to name it param_x even when the value is clearly not the same. On 2b04, the saved original parameter is loaded into EAX, again, being the first parameter for the next call.

Personally, I like to use register names and not renaming them, but what you see here does make sense.

Edit: You can see that when calling external functions, like FindResourceW the calling convention changes and param_1 is now on the stack. This is where it is shown in Green rather than Yellow.

Not the answer you're looking for? Browse other questions tagged ghidra or ask your own question.

8
Ghidra rename variable below current line
3
Can Ghidra show me the p-code generated for an instruction?
1
Local variables and addition not shown in Ghidra
2
Function's signature with unmatching parameters
2
Can Ghidra currently be used to disassemble Tandy Color Computer binaries? Are the 6805 and 6809 opcode compatible?
3
Correct way to understand local_ in ghidra disassembly
1
Ghidra wrong function arguments and returns