Arrangement of variables on the stack - out of order?

I was practicing some reverse engineering crack-mes as part of our university curriculum, and I have a question around the arrangement of variables on the stack.

I run gdb with

I expect the stack frame layout of foo to have the variable a on top of b, followed by c and then z. But that does not seem to be the case.

I have stumbled across this answer in which the explanation shows a similar layout of how variables are arranged. I'd expect that x would be at the highest address in the frame, right below ebp. But the answer clearly shows z being the closest to ebp, given that it is at ebp - 4 but x is at ebp - 12, which seems counter intuitive to me.

I have read a bunch of books, and have seen a couple of online videos on buffer overflows where it is said that the first variable the compiler encounters is the first to be placed on the stack; and order of variable declaration can effect what variables are overwritten in case there is a buffer next to them that's overflown. Is this still a valid statement to make?

Why do I see variables arranged in such an order? Kindly help me out, I'm not sure if my facts are outdated or am I missing something fundamental. 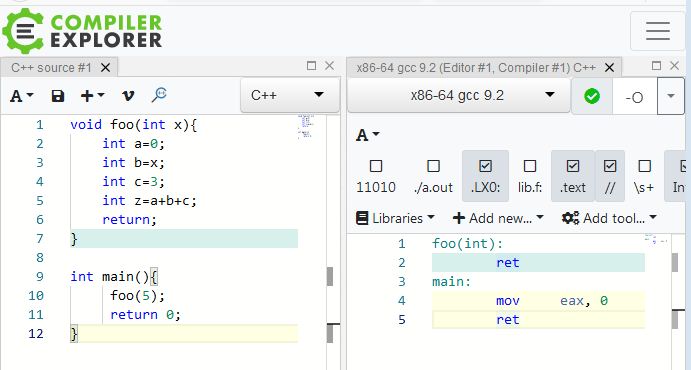 i am not sure what you mean by nearer to ebp

here is a colour coded nonoptimzed output for the same code

as you can see compiler first instruction in white color is your int a=0; which is at rbp-4 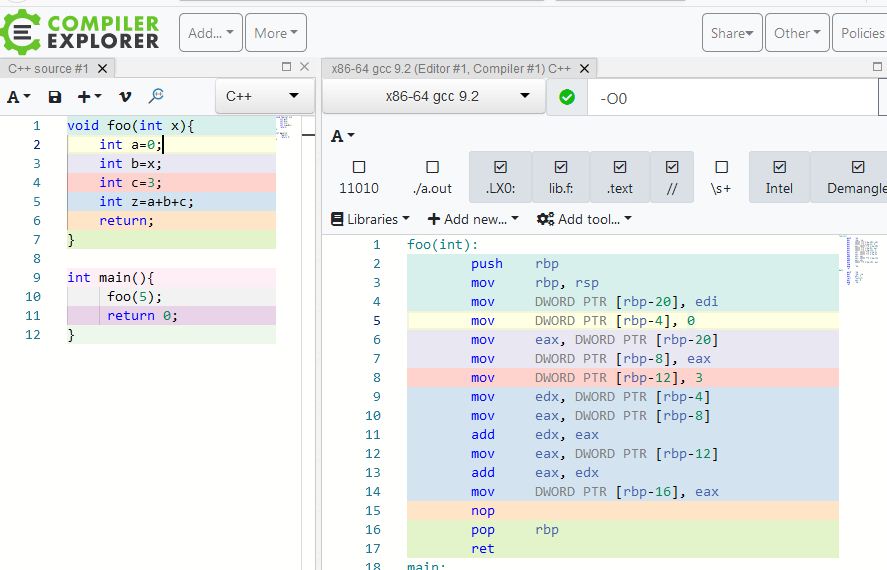 quoting from standard linked in that thread

Each parameter has automatic storage duration; its identifier is an lvalue.164) The layout of the storage for parameters is unspecified.

Not the answer you're looking for? Browse other questions tagged c++ gdb gcc or ask your own question.

6
Annotating the Stack in GDB?
1
Why can't gdb find the address of a stack variable
1
Passing argument through registers instead of the stack
3
GCC change the order of variable declaration
3
How can I find my variables in the running process?
1
Find out if address store in heap or stack
1
Why does this x64 stack have other bytes and seems to be in reverse order?
0
What is the first argument (rdi) to operator+ on x86_64 SystemV?
2
What C++ construct could emit such Watcom C++ 10.5 assembler listing?