Does the loader fill the IAT table of an .exe in load time by checking the corresponding export tables or during run time?

I came upon this question :

Can we hook the Nt or Zw functions using IAT hooking, or just inline hooking?

and it got me wondering, lets say for some reason some function was not in the IAT of our target PE in virtual memory, like the above question which is Zw/NtQuerySystemInformation (I'm still not sure why this is not included in IAT tho), so in this case if we wanted to hook the IAT, would it be possible to hook the export table of kernel32.dll or ntdll.dll and do it like that instead? because i assume this function has to be there at least

so this takes me back to the question, will the loader fill our IAT when its loading the PE into memory by checking the export tables, or when our program uses it? because if its the first case then I assume there is no way to hook the export table right?

also does anyone know why functions like ZwQuerySystemInformation dont get included in IAT but stuff like Sleep and GetProcAddress Does?

the Apis like Sleep are documented a header file is provided in the sdk a library to link against is provided by sdk (windows.h ,kernel32.lib)

so they are designed to be dynamically called using load library , getting the procedure address , casting the return as a typedeffed function pointer

they dont reside in IAT or loader doesnot resolve them

When does the PE loader fill in the IAT?

Hooking an API not included in Import Address Table

There are several ways to do that actually, and Export Address Table hooking is one of them. However, your hook must be installed before the target application looks up the API you want to hook.

Include Nt/Zw APIs in the IAT

also does anyone know why functions like ZwQuerySystemInformation dont get included in IAT but stuff like Sleep and GetProcAddress Does?

The only reason ZwQuerySystemInformation is not included in the IAT is because you didn't tell your linker to do it for you. You need need to link against ntdll import library (available by default in VS2017), or you can build you own.

On my system with mingw and clang installed, I was able to take the code from [2], remove any GetProcAddress/LoadLibrary calls, and build it. This gives:

Then, IDA Free 7.0 allows us to see that NtOpenFile was successfully included in the IAT: 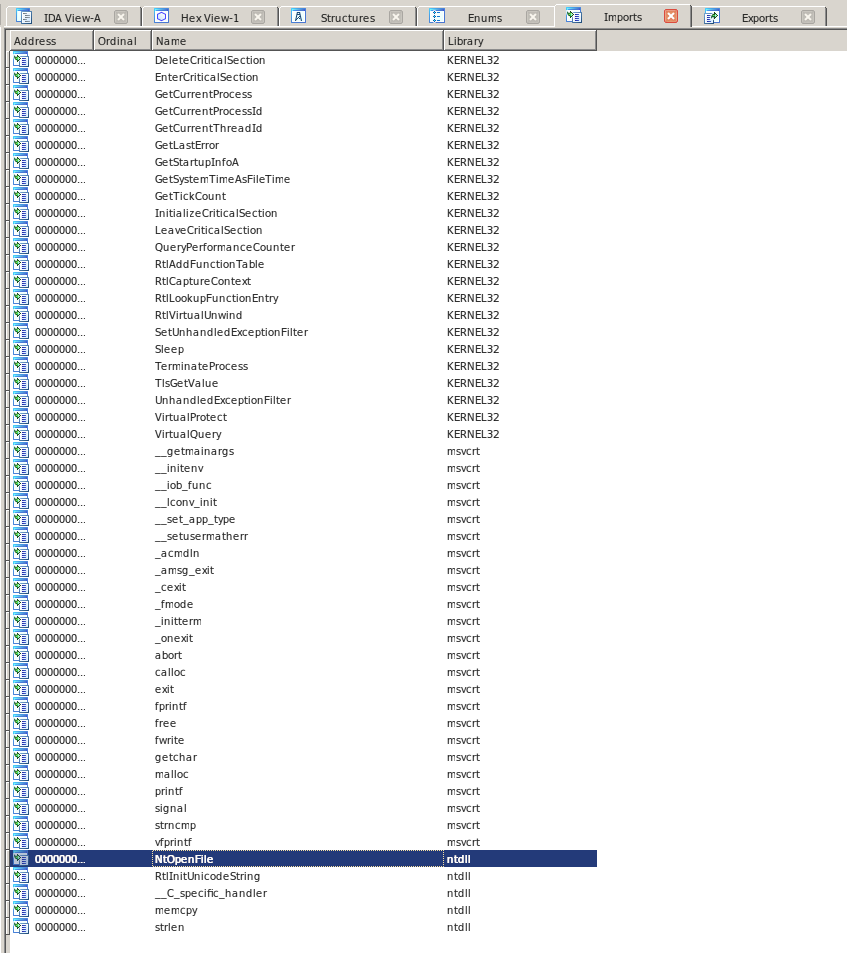 Not the answer you're looking for? Browse other questions tagged windows x86 patching patch-reversing x86-64 or ask your own question.

0
Can we hook the Nt or Zw functions using IAT hooking, or just inline hooking?

9
Is there an easy way to detect if the SSDT has been patched from a memory dump?
8
Loading Windows executable - unexpected data appended at beginning sections after loading in memory
5
How to hook the entry point of a DLL?
9
What methodology can be used to change code flow atomically during program execution?
7
How to Fix a memory dump of a dll - so i dynamically reverse it using olly \ ida
4
Calculation of jmp address through subtraction
4
How to find the index of static ilbrary functions in the PLT of the binary?
0
Can we hook the Nt or Zw functions using IAT hooking, or just inline hooking?
4
Statically recovering thunks in Windows x86_64 DLL