The program I'm currently reversing is missing a section that contains a bunch of interesting strings. I see the memory addresses of where these should be, instead of the reference to the string.

The strings are in the binary file analyzed by IDA, but since there isn't any segment for them, IDA ignored them.

I tried manually creating the segment, which works (it now references unknown variables instead of memory addreses), but I can't figure out how to load the proper data into that section. (The entire section is filed with db ? ;)

The only results I can get from that is:

The segment I manually created has the following settings: 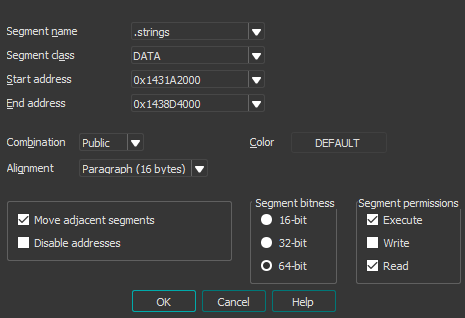 Here's the form I filled while loading the binary file that contains the data I want.

I've never done this before, so it's likely I'm doing something wrong, but I can't figure it out.

Use the menu: File -> Load file -> Additional binary file, and then simply enter the segment address you want.
The reason you fail on this operation is because you are misunderstanding the "segment" in IDA.
In IDA the segment is defined by (selector, base) and offset. The final address is calculated by
(base << 4) + offset.
In fact, IDA is telling you to input "in paragraph", which is 0x10 each paragraph on IBM PC.
But as x86 is using "flat memory model" now, what you should use is something like this: 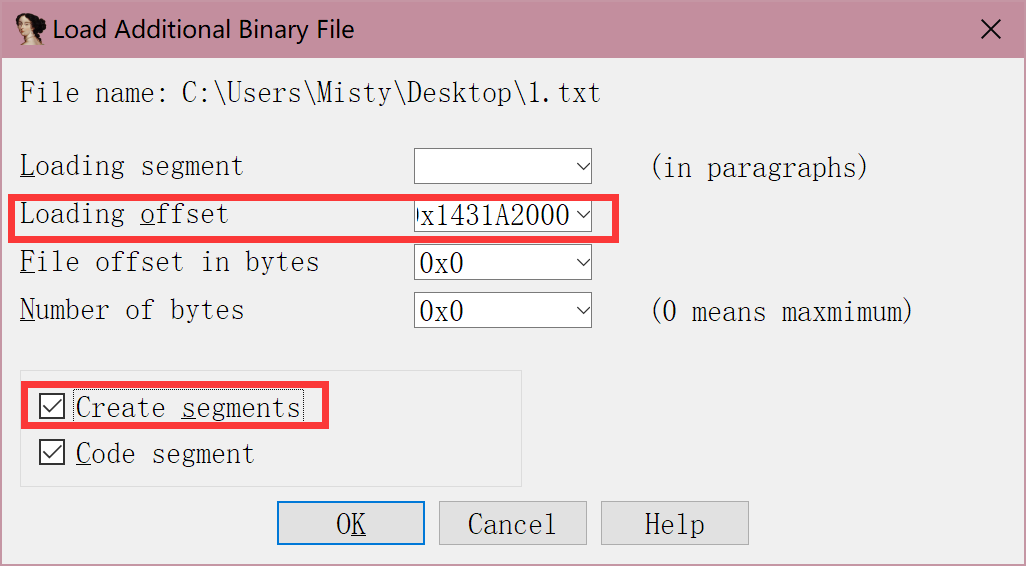 Your original operation will create a segment which has an EA of 0x1431A20000 (note the last zero), and what you will see in the IDA view will be segXXX:XXXXX instead of the "flat" segments like .text

2
How to analyze dumped process?
0
IDA fails to recognize the new added segment during execution and seems to think its empty?

11
How can I change the Read/Write/Execute flags on a segment in IDA?
4
IDA: add segments without losing data
1
How do I load an executable into IDA without it correcting relocatable references?
3
How to configure IDA to load .pdb files from Microsoft public symbol server?
1
Split IDA segment into sub segments
0
IDA fails to recognize the new added segment during execution and seems to think its empty?