Any reason why Ghidra is screwing with this byte in this dissassembly?

I am poking around some PS2 ELFs and I found this weird issue where Ghidra seems to be doubling the value of this byte for some reason.

And what IDA shows:

What IDA shows is the correct disassembly. The first line is supposed to be

But for some reason Ghidra has doubled the 0x76 to 0xEC. And because of that the address loaded in the 3rd line is incorrect. I've double checked that the input files are identical and I know IDA is the correct one because the gameshark code for this particular game modifies that address.

I even confirmed in a hex editor that the byte should be 0x76 but in Ghidra's own hex output it shows it as 0xEC. So during input it's doubling it for some reason.

So any reason why Ghidra is doing this? I tried reloading the file and analyzing as a generic MIPS (thinking it was the PS2 ELF loader I used) and it did the same thing.

So I did some more testing and when I strip off the ELF header and load the file as a raw binary then Ghidra loads it correctly. So I wonder what in the ELF header would cause Ghidra to modify that byte?

This has something to do with the way Ghidra handles relocations. Loading the SLUS_204.99 binary with the following processor options and relocations disabled. 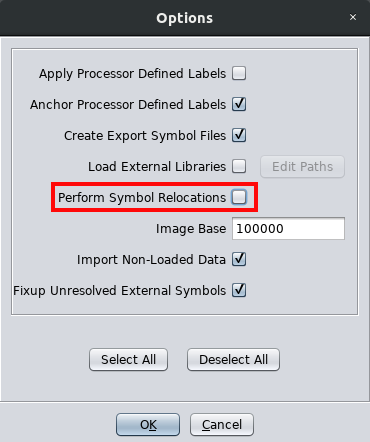 The disassembly is the same as that of IDA.

Using readelf shows that there are relocations of type R_MIPS_26 at the said address.

So the error is likely in the code that handles relocation of type R_MIPS_26.

Not the answer you're looking for? Browse other questions tagged disassembly mips ghidra or ask your own question.

1
Cannot find the caller of the main function in a disassembled firmware
0
How to determine when/where pointers in .ctors get mapped?
2
Finding the correct input of an executable to print out the flag. IDA 7
0
Analyzing raw binary without ELF header in IDA Pro
1
Why does Ghidra show no references to any strings?