In my BA thesis, I wanted to present a program for Windows, using various anti-debugging techniques.

One of them, which I came up on my own (possibly it is well known, but I didn't find it anywhere) involves changing control flow by using signal handlers. As far as I know, when program receives certain signal and has a function registered to handle it, the main thread is paused and the execution is passed to the handler. After it returns from the function, the main thread can either continue execution, or even terminate in case where SIGFPE or SIGSEGV was passed, for example (see this question).

However, in such a case, it is possible to cause the thread executing handler not to stop after it leaves handler scope. The anti-debugging technique I've mentioned before takes advantage of this fact and is presented below.

First of all, I'm aware that the code I'm about to present uses concepts that should never appear in a real program, should be avoided in almost every situation and never tried at home :). After establishing this, consider the following program: (I'm using GCC targeting minGW to compile it)

So here comes my question: how could be such a program debugged, such that it's possible to see printf("continue execution\n"); line being executed?

When I tried to do this using Code::Blocks debugger (GDB), only the information that a program received SIGFPE appeared and the program crushed without printing "continue execution" string.

On the other hand, when I tried to debug it in OllyDbg, execution just stopped, nothing was printed on the screen, and I wasn't able to continue execution to the point where this string should be printed.

Upon "normal" execution it prints the string end finishes as expected.

Edit: I've also tried to pass the exception to the application (using SHIFT+F7), but I only get message saying "Debugged program was unable to process exception" and I'm unable to continue the execution.

Edit2: I will not upload the binary, since when I tried to download it, my antivirus software started to complain about it, so it would probably be marked as suspicious if someone else downloaded it.

You can read more about the technique here: The "Ultimate" Anti-Debugging Reference (pdf)

Not sure if the exact answer you are looking for is in there, but this presentation is one of the best I have seen on this topic: https://www.blackhat.com/presentations/bh-usa-07/Yason/Presentation/bh-usa-07-yason.pdf

I think I have finally found an answer to this question. Since I didn't find an answer anywhere in the Internet (including MSDN documentation for signal, articles covering anti debuggging techniques and exception handling on Windows) and the problem existed in all debuggers tested (OllyDbg1/2, x64dbg, IDA debugger, radare2, gdb), I analysed exception handling mechanism described in Windows Internals 6th edition. Following image and cites come from this book, from page 126.

The exception dispatching process may be illustrated this way (actions will be performed from top to the bottom on the image): 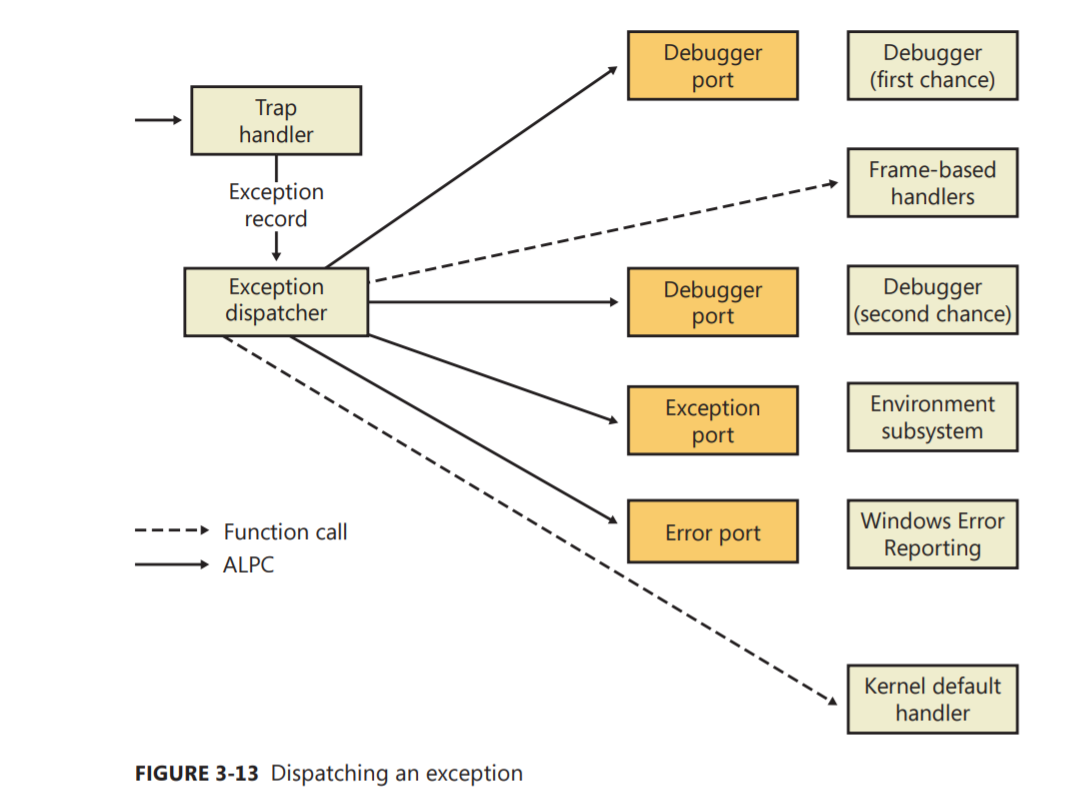 Points 1., 2., 3., 5. and 6. aren't surprising. However, notice the point 4. It says, that if first three points didn't handle the exception and the debugger isn’t running, environment subsystem can translate the exception into an environment-specific signal which is then sent to the application.

But that only happens when a debugger is not attatched to the process and this explains why the exception handler was only called when the program was running outside a debugger. Otherwise, point 4. from the list above was simply not performed.

So, it wasn't simply SEH anti debugging technique (signal function doesn't add a handler to the SEH chain) - in fact it used a different concept and detected debugger in a different way.

Since I haven't found this anti debugging technique described anywhere, I hope this information will help someone, when he encounters such a technique during analysis.

And, since it is not stated in the book how OS checks whether an application is being debugged at point 4., it may be necessary to change the control flow of the program manually when an exception is being processed to force it to execute the handler.

Not the answer you're looking for? Browse other questions tagged windows debugging anti-debugging or ask your own question.

5
Can I trap SIGSEGV (on a Linux) and what are are the conditions to make it works? (for a crackme)
1
ACCESS_VIOLATION when attaching a debugger

1
How can I let IDA execute int 2D so that execution transfers to the exception handler function?
3
Main Thread causes an exception - how to bypass that?
0
Windows XP kernel debugging
3
How do I approach this CTF Debugging Program?
17
Debugging with radare2 using two terminals
1
Why do debuggers sometimes not show entire call stack?
0
Android debugging, stop before app starts on third party app
2
Anti-debug clearing hardware breakpoints
1
How to let SIGTRAP get caught by sighandler in GDB?