How does this command modify the condition?

I'm new to radare2 here. Just started learning and I was trying out a challenge. What does the 3 columns in the radare2 visual mode represent?

May I know how the command below:

Also, what does that accomplish? Does it just bypass the function 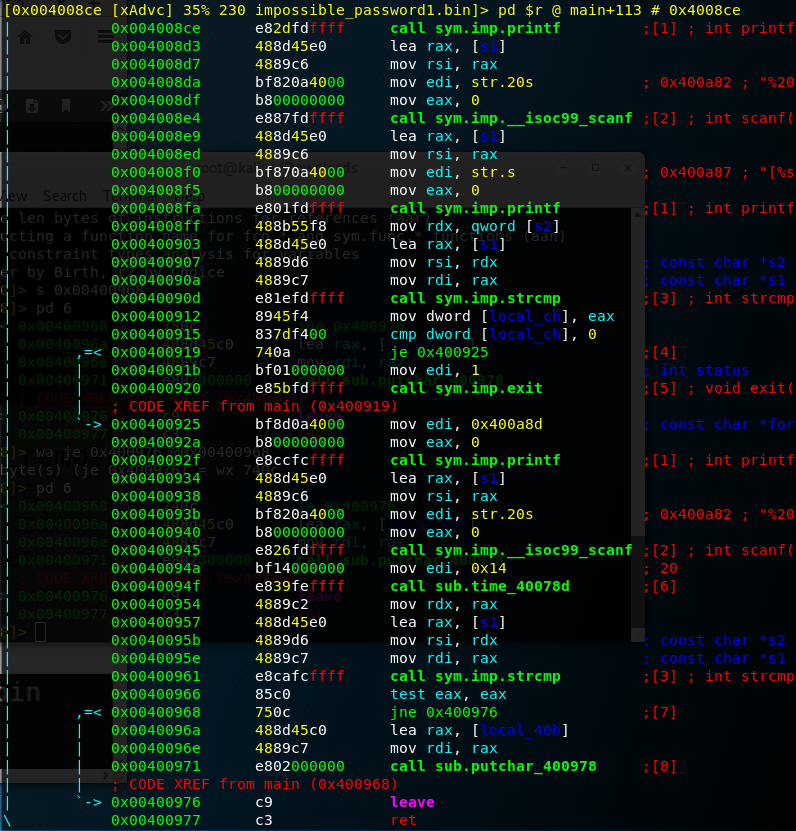 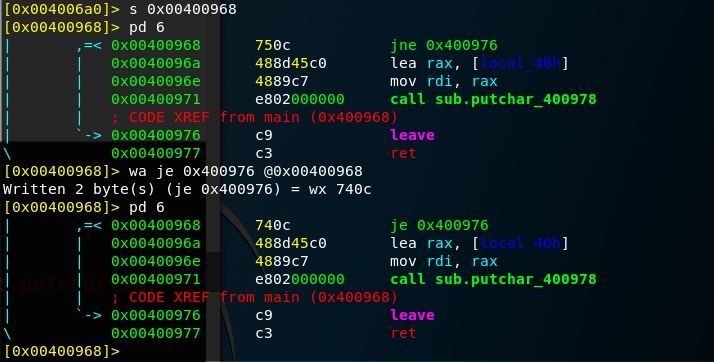 What does the 3 columns in the radare2 visual mode represent?

The first one is an address of the instruction, then opcodes followed by mnemonic. On the far left you have also some arrows indicating jumps and on the far right there are comments.

wa command, which you could check by requesting help in r2, is a command that writes the opcode of the provided mnemonic.

And actually it changes from 750c, and that is the opcode of the jump-not-equal with the offset of 0xC bytes. You requested (by issuing the command wa) to write on that spot the jump-if-equal and the opcode of this is 74. The offset stays the same.

Also, what does that accomplish? Does it just bypass the function

It changes the condition so from now on the jump will be taken when the strings that are being compared (@0x400961) are equal and not taken if they are different. This also happens to the string being printed at offset 0x400971.

Apart from the first question this is nor really radare2 specific stuff. It looks like you should start with some basic assembly and/or RE topics/tutorials that are plenty on the internet.

You can check the official Radare 2 Book where you should find the first steps as well as the basic command to go. The write command is described here

Another resouce I found so useful when I started learning r2 is the two part tutorial Megabeets wrote about a simple crackme.

Not the answer you're looking for? Browse other questions tagged radare2 or ask your own question.

2
My Radare2 Installation Not Working As Expected
1
Trying to identify a string in a strcmp instruction
17
Debugging with radare2 using two terminals
1
radare2- Unable to use wopO command
1
Radare2 - Insert asm instructions without overwriting
3
How to find a memory address of variable?
3
Radare2 Debugging: How do I pipe a program's output to another's input?
2
Modify value to pass jump and print a message with Radare2
1
How to change local_184h to skip past jump commands with Radare2?