Im currently reverse engineering an android app and this app calls a function named "getUserInfo" in an ARM 32bit ELF library called "libcms.so" (from TikTok) via the Java Native Interface.

The app can call this function, so i know the function is there. How can i find the hex location of the function?

There're two broad ways in which you can declare JNI functions.

The first is the more obvious way in which the JNI function has to follow a specific naming convention like JNIEXPORT void JNICALL Java_com_app_foo_bar. You can easily identify such functions using readelf.

The other not so obvious way is to use RegisterNatives. Here your functions can have any signature and further they not need be exported from the shared library. Typically, you would call RegisterNatives from JNI_OnLoad to register the native functions to the Java Run-time.

For your binary libcms.so, it uses the second method.

RegisterNatives has the following prototype

If you analyze the code of JNI_OnLoad you will come across RegisterNatives call like below.

The first member is a pointer to a null terminated string denoting the function name. However, in your case all the names and signatures are encrypted.

These are decrypted at run-time by the .datadiv_decodeXXXXXXXX family of functions. The .init_array section contain pointers to these decryptor functions which implies they will be called at startup.

However, that is not all. The binary also employs Control Flow Flattening Obfuscation throughout, hence the execution path may not be easily discernible as shown below. 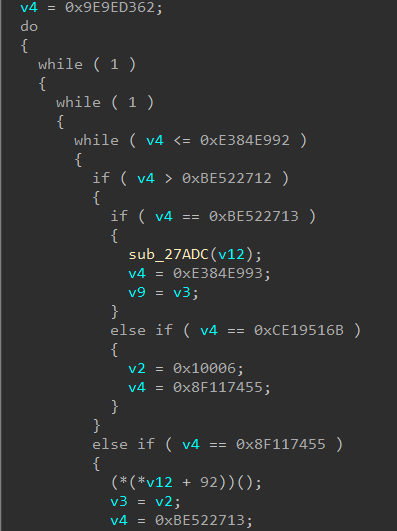 To analyze the binary you're better off resorting to dynamic analysis techniques using a tool such as Frida.

Not the answer you're looking for? Browse other questions tagged android arm elf java symbols or ask your own question.

26
What is a "control-flow flattening" obfuscation technique?
7
How to recover information stored in .ctors section?
1
Finding RegisterNatives function calls in JNI_OnLoad's assembly code

1
Discrepancies in function declarations from decompilers?
1
Android Native Library - How to match java references to sub_XXX function (static way)
3
How to detect JNI calls from smali code?
2
Inject code into JNI function (Android shared library)
2
How can I make sense of an Android NDK library?
1
How to find the executable code of the native method in the library * .so? (Android)
1
How can I see when a library is being called in Android?