How should I approach reverse engineering this text encoding?

So I'm trying to hack the translation from the PS4 version of a game into the Vita version. The script files were conveniently uncompressed, and I was able to drop them in and have it working without a hitch - great!

However, various other message files and quest summaries and the like are not so convenient.

Here's a comparison of two files in a hex editor: 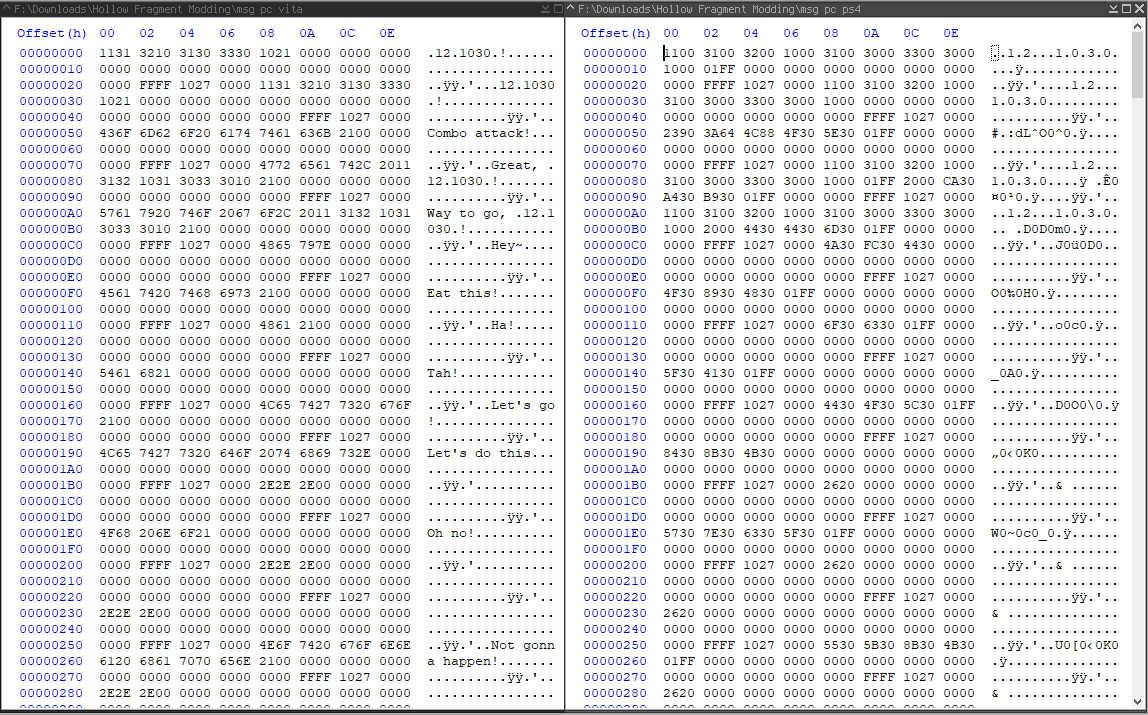 At first I thought it was a simple byte-pair compression, but there's obviously more to it than that, because if you look at the places which correspond to "Let's go!" and "Let's do this!" they don't start with the same string of characters at all.

Going through it and looking for common and recurring words, I found this:

And you don't see the EA30 that starts off "Grief".

I have a feeling FC30 could be some kind of switch byte, either an upper case indication or possibly marking the use of some kind of lookup table? It's also interesting that all the lines which are just objectives/boss names have the --30 structure, but some of the descriptive passages don't seem to.

The additional problem, of course, is that the uncompressed English text from the PS4 version won't be a 100% perfect match for the text from the Vita version -- that's the whole point, after all! So even when I look at the name "Deep Grudge" and notice that I don't see anything which looks like it would correspond to the "Gr" from "Grief", I can't be certain that they didn't change the name in the PS4 version.

Does anyone have any suggestions on how I should be approaching this? If I'm right and there's actually some kind of compressed lookup table business going on, then it might be effectively impossible to reverse, right?

The way you can learn this encoding is to study Japanese. :) From the first line of your text file diff, we can see that this on the left:

Translates to this on the right:

This is a very strong hint that the file on the left is using an 8-bit encoding and that the one on the right is using a 16-bit encoding. The digits are translated in a very straightforward way, but the exclamation point ("!") is 0x21 in ASCII or UTF-8 but 0x01ff is the Unicode "fullwidth exclamation mark" encoded as UCS-2 (that is, UTF-16 encoded as little-endian).

is rendered as ゴブリンシーフ which is the Katakana representation of the English words "Goblin Thief". It's common for Japanese speakers to render foreign words into phonetic equivalents with Katakana. So taking it syllable-by-syllable we have:

So if we say it aloud, "go bu ri n shi-i fu" sounds like "Goblin Thief" as pronounced by a native Japanese speaker. You can try Google translate to experiment a bit more and to see and hear what this sounds like.

Not the answer you're looking for? Browse other questions tagged encodings or ask your own question.

5
Retrieving encryption/encoding logic from dll
4
Does anyone recognize this keyboard encoding scheme?
5
Does anyone know this encoding?
1
Need some pointers to decode/decrypt/unobfuscate JSON files (updated with related scripts)
2
How to identify the encoding performed on this string
2
Reverse engineering a partially known binary format
1
What encoding is this?