I have the following code:

This is a segment of x64 assembly code, and I would like to rewrite this code into C. I've been reading Assembly books all day, and I'm still having some difficulty. I just want to understand what this code is doing. From messing around, I think that it performs some operations on an int (that's why I think the DWORD is there) and a long (that's why the QWORD is there). I think that this is true because I recompiled C code with those data structures and those words appeared in the Assembly equivalent, but I could be wrong.

Any help is appreciated in decoding this code.'

For Amigag: second segment of code

I believe the best tool for rewriting assembly to C is IDA Graph View, which is toggled with space.
It let you see the function as Basic Blocks, connected by control flow instructions. In this specific function, I cannot spot any jumps so you will see one long block.

The first thing you usually see in a function is the function prologue which sets up the stack frame.

You can see that a "magic" value (0x1a2b3c4) is saved in a local variable and a pointer to it is created. Note that when it's saved, it is stored as little-endian, which means the order of bytes is reversed.

And in a similar way, a value is calculated using next bytes, multiplied by 0x10 (=16), 8 and 1 (implicitly) respectively. results are stored in edi, and ored with the previous value.

We can conclude that our function is something like that:

So, what we can see is that the magic value is read back to a variable, while saving the little-endianness, which means we will get the reversed byte order if the magic_value.
Thus, we can expect the output to be:

Also, as a general note, this code have could utilize loops to perform the read. 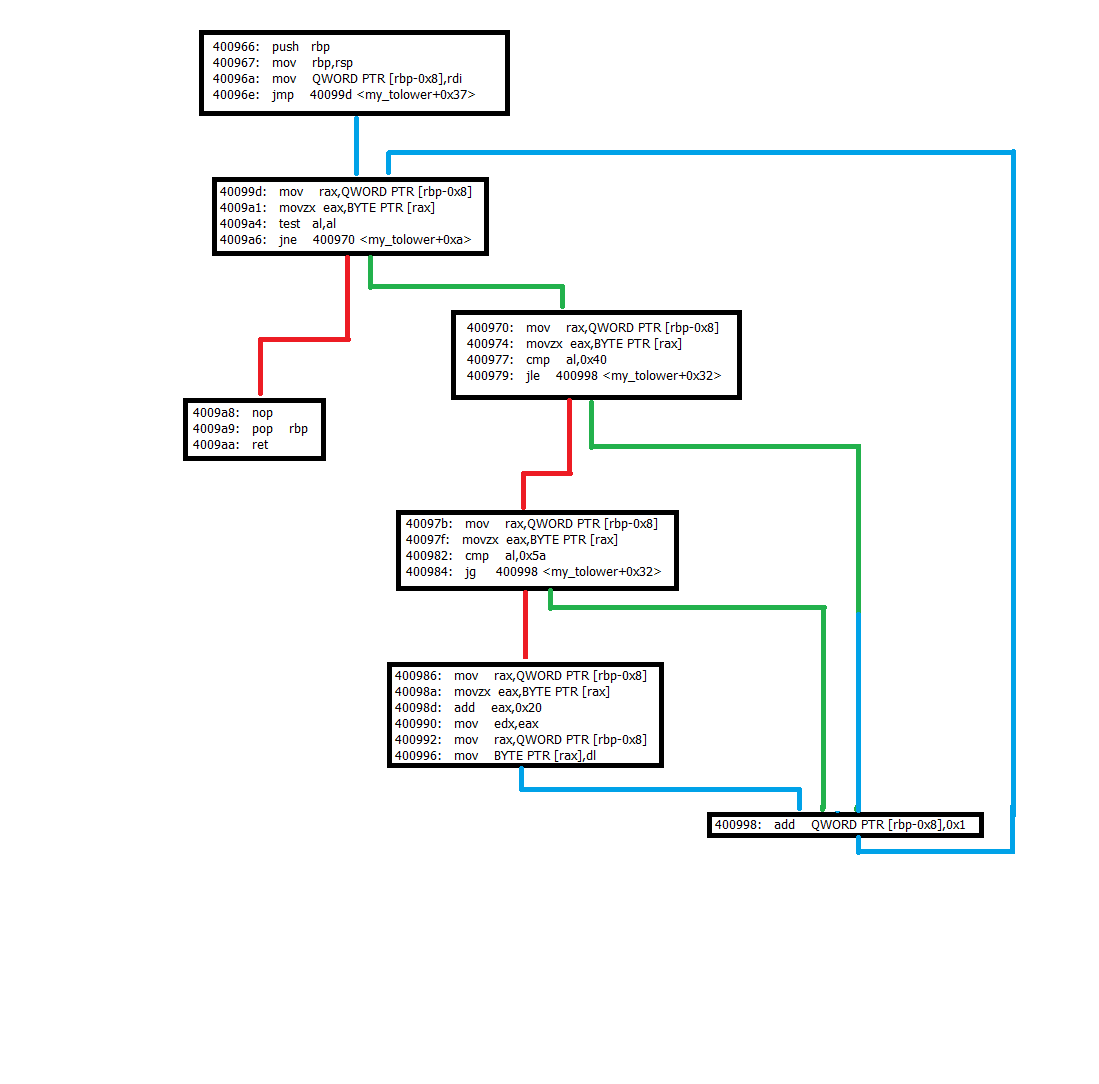 The first thing we get to see after the function prologue is a single parameter is saved at rbp-0x8.
On the block of 0x40099d we can see that the input is probably char *ptr, it dereference the pointer and read it's value.
From the test al, al we can assume that the value is a string (and not just binary data, it is probably related to user input) and we stop once we have read the null terminator (\x00 = 0).

Looking at 0x40097b, we can see a similar code, but it checks the character is smaller than 0x5A (=ascii of Z). so we can write those conditions in a single if:

Looking at 0x4009a8, no result is passed to rax, that means the function probably doesn't return a value.

We could also rewrite the function to show the single block that increments the pointer, which i believe is how the original code looked like. it makes more sense logically that we change the string if a condition was met, not if a condition is not met.