How to handle stripped binaries with GDB? No source, no symbols and GDB only shows addresses?

I have GDB but the binary I want reverse engineer dynamically has no symbols, that is when I run the file utility it shows me stripped:

What options do I have if the environment in which this runs doesn't allow a remote IDA Pro instance to connect to gdbserver? In short: the environment you have is limited in what it allows you to do, but you do have trusty old gdb and a binary to reverse engineer.

I am trimming the output of GDB for brevity since it usually shows the copyright and other information at the beginning of ever session. When I reproduce the output I'll start at the first (gdb) prompt line, or in case or auto-executed commands from the first genuine output line.

In order to distinguish commands entered at the GDB prompt, these will have a leading (gdb) just like in the real world. For shell command this will either be no prefix at all or $ as it appears to be the convention on most unixoid systems.

When I use a particular command, such as vim as my editor, you are free to use your own favorite editor of course. Be it emacs or nano, I won't judge ya ;)

This section is about setting up your gdb environment and starting the process. I'll also include a few tidbits for the complete newcomers.

Tricks you should know

GDB has a nice prompt at which your cursor will stop after the program breaks or whenever you are stepping or some such.

Getting the process to run

Since we want to dynamically analyze the binary, we need to start it first.

We can do that straight from the command line by passing not only the path to the binary, but also the arguments we want to start it with. The whole process then looks like this:

Easy enough. From the (gdb) prompt you can then issue the run command (shorthand r) to run ./exe with the parameters given on the command line. I prefer this method, but your mileage may vary. 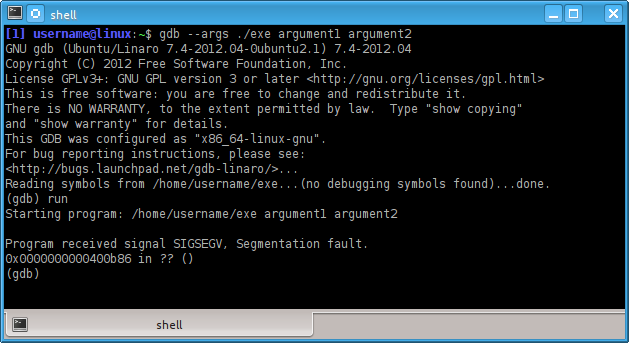 Fire up GDB and at the (gdb) prompt use the file command to load the binary and then use the run command to start it with the arguments you want to pass:

an alternative to the above would be the use of set args like this: 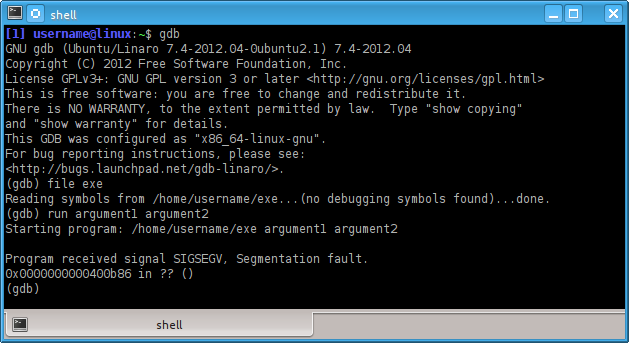 You can also see in any case which arguments run would pass to the started process by issuing a:

Phew, but why does the program stop with a SIGSEGV (segment fault)?

Well, we don't know yet, but it looks like this little beasty wants the proper treatment. Since we practice defensive computing, we don't want to run anything we don't know much about, right? So let's start over. If this would have been malware we'd have to flush the machine and reinstall or restore a snapshot if it's a VM guest.

First we'll want to run the info command as follows: 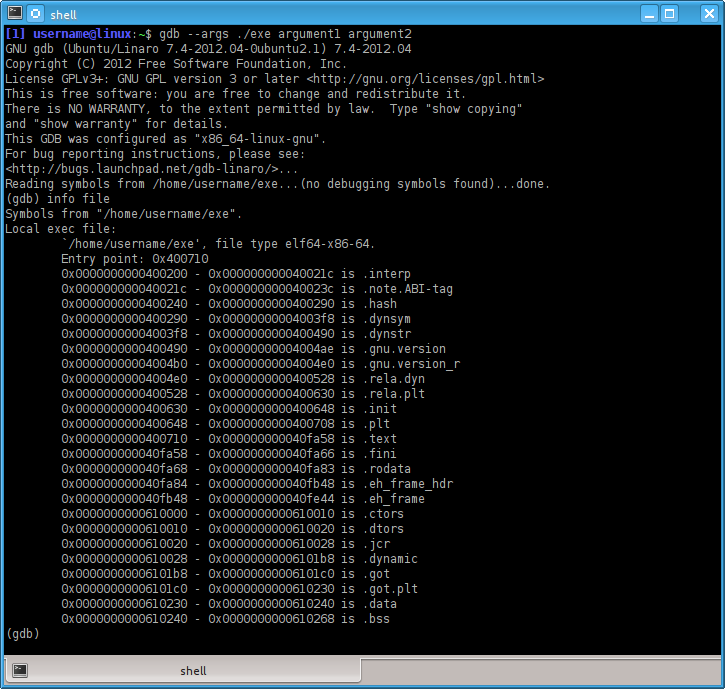 There are two important pieces of information, the most relevant for us being the line stating:

alright, so we can set a break point on that one and then run the process with the arguments we fancy.

But wait, this is getting tedious already. No easy method to automate these steps in some way? As a matter of fact there is. A file named .gdbinit can be used to issue commands to GDB upon startup. You can also pass a file with GDB commands using the -x argument on the (shell) command line. If I have a number of projects, usually they are in subfolders with a .gdbinit file each.

Side-note: -nx prevents the .gdbinit contents from being executed upon startup.

So we know which arguments we want to pass and we know the address of the break point, this translates to the following .gdbinit file:

The output I get when I start gdb without any other arguments is:

Nice! But this looks different ...

So you're used to see the next line you're going to execute and then your trusty old (gdb) prompt. But no such thing. We have no source for this binary and furthermore symbols. Doh! So we contemplate the blinking caret at the (gdb) prompt and wonder what to do. Don't fret, GDB can also handle assembly code. Only problem, it defaults to the - in my opinion - inconvenient AT&T assembly syntax. I prefer the Intel flavor and the following command tells GDB to do just that:

And how is it going to show us the assembly code? Well, similar to the TUI mode (check the tag wiki for gdb) by using the following command:

and if you are so inclined, also:

which will also show you the contents of the registers in an overview.

So we end up with the following .gdbinit for our purposes:

And when we start gdb without arguments we end up with this: 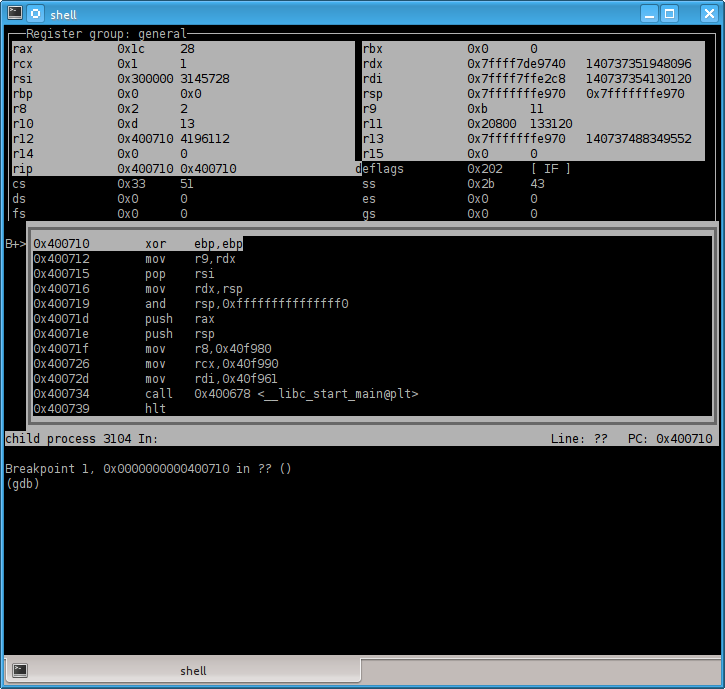 Sweet. So we can see the disassembly while we step through the code. We could conclude this here, but of course there are more tricks to be learned, so why not go a little further.

NOTE: the registers with white/gray background show that a value has changed. Not too meaningful when we just started the program, but mighty useful when stepping through code later on.

btw, if you prefer to save screen estate

on GDB versions before that you can emulate the behavior by settings an automatic display:

or shorter disp/i $pc where /i is the format, you can remember it best by thinking "instruction" and $pc being the instruction pointer, also known as program counter - hence pc.

Sometimes when stepping through assembly the regs and asm views will get borked. Simply execute the respective layout commands again to restore them to their old glory:

Turns out when you are in assembly mode some of the commands you are used to from source-level debugging simply won't work. That makes sense, because a single source line means usually a dozen instructions or more. The next and step commands, however, have instruction-level counterparts:

From our disassembly above we know:

and for all practical purposes this is the main function. Of course if you were to reverse engineer malware you should be more careful, but in this case it is. So let's add a breakpoint to this address (0x40f961) instead of the entry point:

If we examine (shorthand x) the code at which we are currently, we can see:

Okay, the call is what we want to follow, so let's step inside of it using si. We get to see another call immediately at the instruction pointer when entering the function:

The call leads us to a function which calls ptrace(PTRACE_TRACEME, ...), now why would it do that?

Well, it's an old anti-debugger trick which Mellowcandle has described in another Q&A here:

But how do we get around it? We'd have to overwrite the call to the function which calls ptrace() with nop or something along those lines.

This is where GDB becomes a little unwieldy. But we can use set so do the magic for us. Let's first inspect the instruction bytes:

The 0xe8 is a call instruction and we know now that it is 5 bytes long. So let's nop this out. (x/10b $pc means examine 10 bytes at program counter - default format is hex already).

and verify the patched location:

Excellent. We can now execute it.

Alternatives to the given method

Better ways yet to manipulate/patch the running program

There are alternative (and way superior) methods like this one by Tavis Ormandy. I'm reproducing the assemble macro below (in case it goes offline from the other place):

Again the above script snippet wasn't written by me, but by Tavis Ormandy - see the link above.

This concludes this little Q&A.

Not the answer you're looking for? Browse other questions tagged tools dynamic-analysis linux debuggers gdb or ask your own question.