Change value of an IF condition found in IDA

so I have the .idb file of an executeable I want to modify.

In the IDB file, I found this code 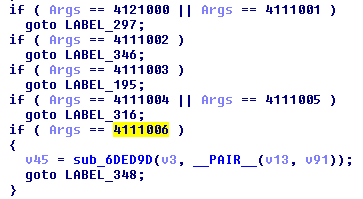 And I basically want to change 4111006 to 1006 in that IF condition. however, when I press TAB to go to pseudocode, this is what it shows me

Is it possible to find 4111006 and change it to a different integer value? If so, how can I do that? Thank you.

The way how those IFs are constructed in the assembly is a bit different than what you see in high-level overview in IDA code.

Apart from the first one, ifs are represented with subtraction (sub & dec) and jz.

This code is an alternative of conditions:

and is represented in asm with this code:

because in the first 4 lines (excluding 3rd) you have the first part of the if (standard cmp + jz) and then later a value of 4111001 is subtracted from eax. If it results in zero then we know that the value was equal to it and we jump to the same location. So IDA identifies this as an alternative of two values: 4121000, 4111001.

The following ifs are represented with this:

Remember that after the line 6DCC62 the value in eax we compare with is already -4111001, so if we subtract one more time and if we get zero, we know that the initial value was 4111002. This is why IDA represents this as:

The next branches are the same. So you if want to modify the last one, you would have to modify the line that IDA correctly pointed you to + the one before. So instead of having there the same pattern as for all the other ifs, you need to write:

and assemble such opcodes.

Not the answer you're looking for? Browse other questions tagged ida assembly ollydbg decompilation executable or ask your own question.

4
What ways is there for an application to detect that it has been modified?
1
How to cause program to stop execution when a particular value is found in memory
0
immediate value change when start debugging
0
What is this assembly code, fld qword ptr code here doing? Also, how do I store my own value?
0
IDA Pro ignores condition in breakpoint
2
IDA Pro: How to change segment register value
0
Is it possible to make a dynamic memory allocated .data segment to static in a file?
0
Change global variable value in IDA