In a 32 bits Windows binary, I see this code:

I see that something happens on the int3 (an error), but I don't understand why, and how to follow execution while keeping control.

this trick is (ab)using Structured Exception Handling, a mechanism to define exception handlers, typically by compilers when try/catch blocks are used.

In 32bits versions of Windows, they can be set on the fly, without any pre-requirement (unless the binary is compiled with /SafeSEH).

So here is what happens: 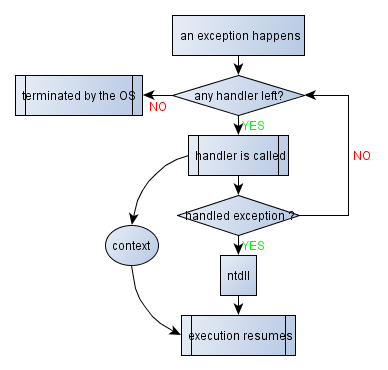 As we want to go through exceptions ourselves, we have to ask OllyDbg not to handle them:

And when an exception is triggered, we have to enforce that execution is done via exceptions (see below).

Here are 3 methods of increasing level to follow the exception handling execution safely:

As the handler has just been set on the stack, you can manually set a breakpoint then run.

KiUserExceptionDispatcher is the Windows API handling all user-mode exceptions. Setting a breakpoint there guarantees that you keep full control - but then, you're in the middle of a Windows API ;)

In this case, you can ask OllyDbg to skip exceptions, as you will still break execution manually in any cases. You might also want to combine that with a script.

Of course, some advanced code might check that you set a breakpoint on it before triggering an exception.

7
How does services.exe trigger the start of a service?
7
Can I set entry point at code in PE headers?
11
How can I generate a call graph from an unstripped x86 Linux ELF?
0
Arm function save registers r0 and r1
3
Win32 SEH address
7
What are the difference syscall and int 0x2E instructions?
2
Call instruction changed while running
0
A question about moving data with LEA and MOV
0
How do I interpret this double offset?