Understanding Program Arguments on the Stack in Assembly

To self-teach myself reverse engineering, I am writing small C programs and reversing them in order to understands how the compiler sees my code. However, I am having quite tough time understanding the stack concept w.r.t command line arguments.

The conversion is as follows: 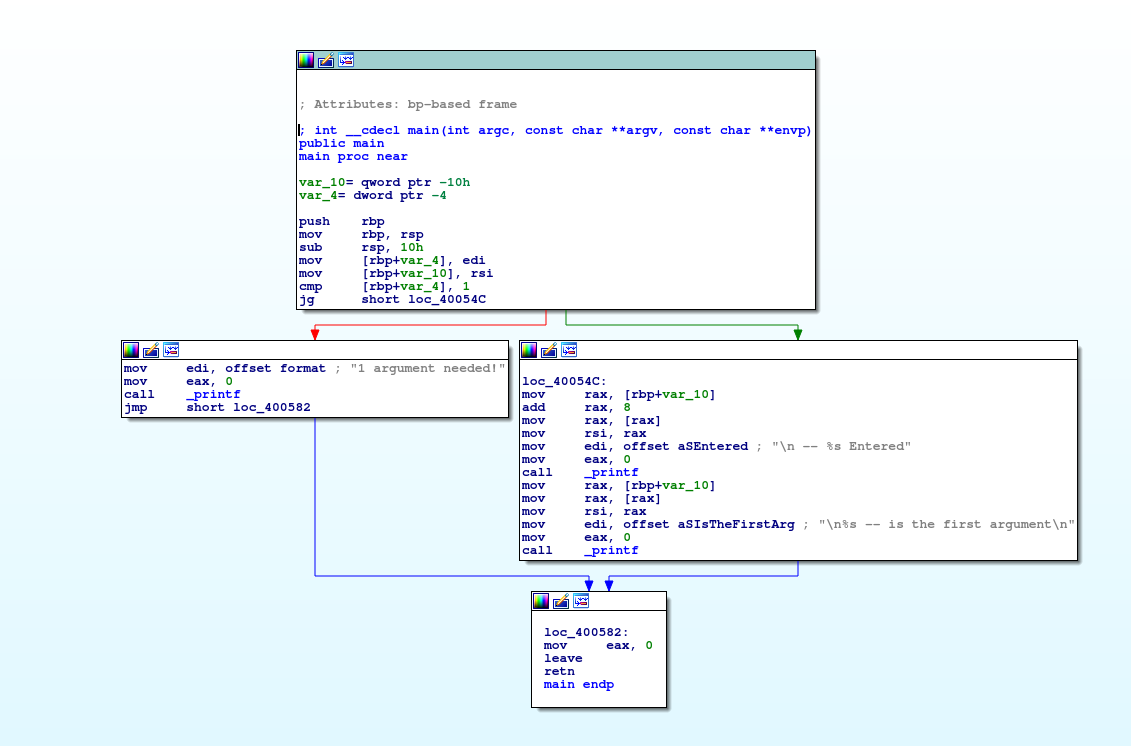 The commented parts are where I am having a tough time:

First of all, you have to understand that there is a specification for all these things. These specifications differ from one assembly language to another and from one operating system to the other.

These global specification are called Application Binary Interface (ABI) and define, among other things, what we call the 'calling conventions' of functions. IDAPro seems to have found that your program is following the cdecl convention but I doubt it is correct, I think that the calling convention used here is fastcall within the amd64 SystemV ABI (see the wikipedia page about calling conventions). My guess is that you are using Linux...

The space allocation (sub rsp, 10h) come from the fact that you have to store one int (argc) of 4 bytes and one pointer to a char* (argv) of 8 bytes. I know, when added it is only 12 bytes and not 16 bytes (10h). But, the access in memory for the CPU have been optimized when they are aligned (meaning that they start at an address which is a power of 2, or, if you consider hexadecimal representation, the address must end with a 0). So, the compiler decided to round-up the memory needed to align the data and be more efficient fetching it.

Then, you have the memory space available on the stack, now lets go fetch the data. So, for that you have to know what does the caller function before starting the function we are currently looking at.

In fact, the previous function, before calling the function we are in, has stored the arguments of our function in some registers. Here, it is important to agree that all the function (caller and callee) will use the same set of registers to pass the arguments from the caller to the callee.

What do we do with this? Well, we store preciously argc and argv within our stack-frame in the memory we just allocated before.

Well, that is about all you really need to know about the fastcall convention in Linux. Now, the program should be more understandble to you.

Not the answer you're looking for? Browse other questions tagged assembly c stack amd64 arguments or ask your own question.